Winter wheat planting is underway in the southwestern Plains. According to the USDA NASS Crop Progress Report, Colorado is already 20% planted, Nebraska is at 5%, Kansas sits at 3%, Oklahoma has made it to 11% complete, and Texas -- which has gotten some better precipitation in the central and eastern portions of the state -- is at 17% complete.

This area of the country continues to search for good rains so planting activity can continue and good establishment can be achieved. From Nebraska to west Texas, drought continues to be the major story, following two straight years of La Nina dryness and the outlook for a third this coming winter.

La Nina typically produces lower amounts of precipitation in the southwestern Plains wheat areas as well as above-normal temperatures, causing greater depletions of soil moisture and limiting recharge during the winter. Fall rains can be variable, however, and the hope is that even in the tremendous drought across the region, that there will be enough soil moisture from these rains to get the roots going and build enough of a root zone before winter sets in. Worry could then be pushed off until the springtime where frosts and drought would still be concerns.

The next week is not going to be favorable. A ridge of high pressure is settling into the eastern half of the country. That brings southwest winds across the Plains, drifting from the southwestern deserts to produce very hot weather in the region. Temperatures will routinely reach into the upper 80s and 90s through Sept. 20. Some small disturbances will move from the West northeast into central Canada for the next week, and each disturbance will produce some showers. However, they will move over the Northern Plains and any chances for showers across the southwestern Plains is going to be isolated and overall unhelpful to most producers. The combination of heat and dryness will only worsen drought for those seeds already in the ground, and deter other producers from planting into the same conditions.

But it is not all doom and gloom. While hot and dry conditions are forecast for the entire fall season, that does not mean that good rains cannot come in from time to time. Such may be the case in the middle-to-late next week time frame. One of those disturbances could be a bit stronger next week. Models are waffling on its strength a bit, but there is at least a chance for a stronger trough to move through Canada that would stir up a storm system and cold front strong enough to go sweeping into the Plains.

The good news actually comes with the potential strength of this front, or lack thereof. With the trough forecast to weaken as it moves across Canada, the front would stall. Both the European and American GFS are pointing to the front stalling over the southwestern Plains in the Sept. 21-23 timeframe. They differ on the timing, location, and intensity of rainfall, but both models show some potential for good rains in hard-red winter wheat country. Amounts over 1 inch are looking fairly likely for this forecast beyond a week in advance, while widespread amounts over 2 inches will be possible. While overall conditions this fall may turn out to be unfavorable, a good rain event at this time would at least let growers get their seeds into the ground with a chance at developing roots instead of quickly drying out and dying. The rains may still be below normal, but most producers would tell you that timely rains may be better than the overall amounts. This situation continues to be closely watched.

Previous Post (It's A Real Drought When a River Dries Up)
Next Post (Central Plains Were Record-Dry in August... With Some Thanks Going to La Nina) 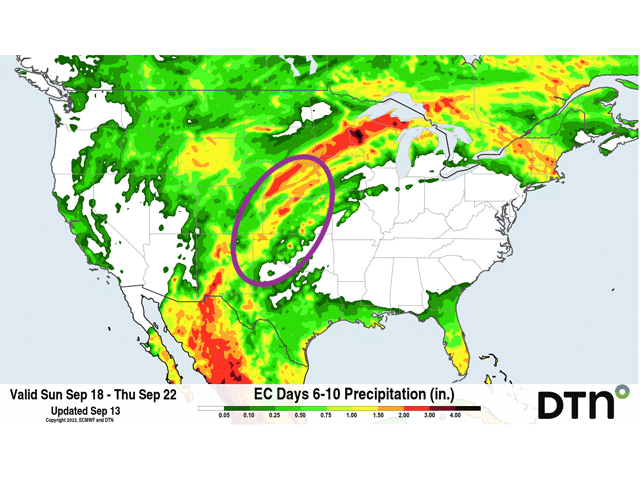