We have talked a lot this summer about heat, dryness, drought, flooding, and the occasional severe weather event. But very little attention has been paid to the tropics. Very often, areas near the Gulf Coast or Carolina Coast count on and need precipitation from tropical systems to reduce stresses from heat and drought throughout the summer. Those inland in Texas through the Delta are hoping for some tropical rainfall to ease their drought concerns. Thus far, it has been tough to get good rainfall in these areas; but there are some systems to watch out for both in the short- and long-term.

Through Aug. 16, only three named storm systems have formed in the Atlantic Basin and there hasn't been an active storm since July 3 when Tropical Storm Colin meandered briefly on the Carolina coastline. All three storm systems only reached tropical storm strength, though Alex did reach a peak intensity of 70 mph on June 5. Sustained winds of 74 mph or greater classify a tropical system as a hurricane.

However, since early July it has been very quiet. Conditions have not been kind for tropical storm development. The conditions needed for producing tropical systems are warm sea surface temperatures of generally greater than 26 Celsius (78.8 Fahrenheit), low amounts of wind shear with height through the atmosphere, and some sort of triggering mechanism. There are other considerations as well, but these are the main ones.

Sea surface temperatures have not been a problem. Although sea surface temperatures in the Atlantic Basin have been a shade below normal in many areas so far this summer, there is a wide swath of temperatures eclipsing the needed 26C-degree mark from Africa all the way to the Gulf of Mexico and halfway up the Eastern Seaboard. And there are plenty of areas in the Gulf of Mexico, northwestern Caribbean Sea and western Atlantic that are near or over 30 C (86 F). Fuel for producing hurricanes is abundant.

Shear has been a major reason why conditions have been poor for tropical development so far this season. Shear describes the change in wind direction and speed with height. High amounts of shear can organize a thunderstorm or complex of storms and strengthen them quickly. But eventually, the winds tear the thunderstorms apart so they cannot persist for the long periods of time needed to create a tropical storm. Lower amounts of shear also allow tropical storms to produce their distinct eye, a feature of a hurricane we are all familiar with, and the reason why these cyclones can produce intense winds not seen in other storms. Shear so far this year has been a mixed bag. It has shown up in places where we might otherwise be concerned about tropical development. When an interesting area of thunderstorm activity has occurred, it has typically been subject to high amounts of shear that have ripped the thunderstorms apart.

Triggers for tropical cyclones have been rather frequent, usually coming with a tropical wave that comes off the coast of Africa and moves west through the main development region (MDR) of the central Atlantic. Either there in the MDR or crossing into warmer waters of the Caribbean, storms frequently develop this time of year. These waves have been frequent but have also come with loads of dust from the Sahara Desert. The drier upper-level air has eaten away at thunderstorm development many times when a promising tropical wave has been crossing in addition to the bursts of shear.

But another tropical trigger can come from the tail ends of cold fronts that move through the U.S. and into the Gulf of Mexico or the western Atlantic. Those have also been frequent but have lingered much closer to the shoreline than getting farther offshore. Hot air across the South all summer long has stopped these fronts from penetrating too far offshore. Because they have been so close to land, they have not been able to tap into the warm waters off the coast and have not really developed.

One of these systems tried to form this past weekend. A little low-pressure center developed along an old front in the northern Gulf of Mexico and moved westward into southern Texas. It was not organized enough to become a tropical storm, but heavy rain and flooding occurred as that system moved west toward the Rockies. After a few days of meandering through northern Mexico and New Mexico, the low is forecast to make a jaunt eastward through the Southern Plains and Delta starting Sunday. Should this occur as forecast, it would be the tropical moisture that the region desperately craves as crops continue to fill.

A tropical wave off the coast of Nicaragua will be moving northeast through the rest of the week, getting into the Gulf of Mexico on Friday. In that area, conditions are looking favorable for tropical development. While it may only have a short time to develop in the Gulf, it could move through Texas and merge with the other system to produce more widespread rainfall for the state.

Conditions across the Atlantic basin and the MDR specifically are turning much better for tropical development. Episodes of Saharan dust are forecast to degrade over the next several weeks, sea-surface temperatures are reaching their peak, and shear, in general, is decreasing across the MDR.

There is no shortage of tropical waves moving off the African coast as well, so the potential for more storms will certainly be increasing over the next several weeks. That should come as no surprise as the heart of the Atlantic hurricane season is from mid-August through mid-October. We are just getting into the peak season and the forecast is favorable going forward. I would expect to see more references to the tropics in the days and weeks to come. That could be a boon to drought areas inland from the coast, but we will have to see. Outside of the South-Central U.S. over the next week or so, it is impossible to know who may be hit, or if any tropical storms or hurricanes stay over the Atlantic and are steered away from the mainland U.S. 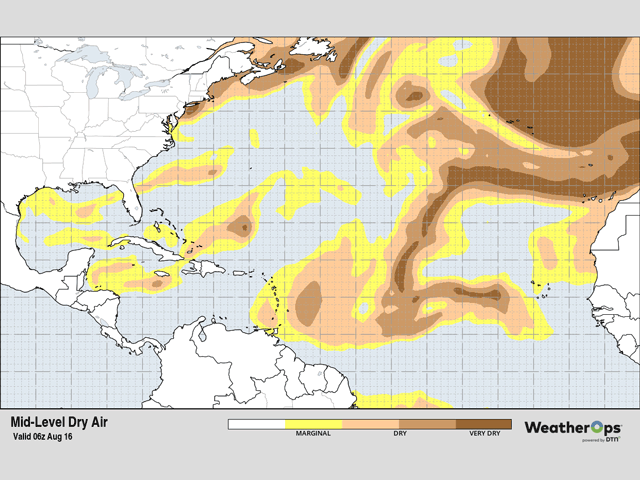