Spring is about to lose some of its momentum. It has been chillier in the Northern Plains and Upper Midwest recently, but areas of the Plains and Eastern Corn Belt down to the Gulf Coast have been hitting higher temperature readings during the past week.

That continues ahead of a large storm system moving into the Plains on April 12, but the effects will be short.

The warmth ahead of the system is in stark contrast to the cold behind the system moving in from the Canadian Prairies to the Northern Plains. The temperature difference between the two air masses of 50 to 60 degrees is what is fueling an incredible spring storm that will leave areas from Montana to Ontario with 1 to 2 feet of snow and produce strong to severe thunderstorms with heavy rainfall from the eastern Plains eastward. The system will wrap cold, Canadian air from the northwest across the northern half of the country. But that will not be the only system to talk about.

Another will move out of the West and eastward this weekend into early next week. Models are still deciding on where to put the precipitation, but it could mean a mix of rain and snow for the Northern and Central Plains through the Midwest, possibly even south of the Ohio River.

That system will pull the colder air south through the rest of the country for several days next week. The cold could produce some frosty mornings in the Ohio and Mid-Mississippi River Valleys. Soft red winter wheat, which may have become more advanced during the last few weeks in southern Indiana, Ohio, Illinois, Arkansas, Kentucky, and Tennessee, could be in line for temperatures to get into the 20s Fahrenheit on a couple of mornings. That is still to be determined, and if it does occur, could produce some frost damage for wheat.

According to the USDA's Crop Progress Report released on April 11, this area of the country has yet to plant much, if any of its corn. And with the forecast, producers may be holding off a bit longer as well. Planting progress is already a little bit behind for most of the country outside of Texas and North Carolina, but we may see those numbers fall farther behind with the upcoming cold.

Wet ground already along and east of the Mississippi River will have a harder time draining with the colder conditions. And soils that were just starting to get into the optimum range for corn planting are likely to see those numbers slipping a bit during the coming days.

Back across the Central and Southern Plains, the cold anomalies will not be as severe, but temperatures will still fall to or slightly below freezing across Nebraska, Colorado, and western Kansas through early next week. Some frost damage may occur in these parts as well.

But farther north, where the heavy snow falls, the cold that comes will be maximized. Cold begets cold and the snow will only enhance the cold that is coming from farther north. This will mean that the sudden heavy snowpack takes longer to melt. That is a good thing for reducing flooding risks of the 1- to 2-inch equivalent of liquid stored in the snowpack, but producers hoping to do more spring wheat planting or fieldwork will have a more limited time in which to do so.

The trough producing the cold weather will move out of the U.S. by late next week and be replaced by a ridge, though it will likely be temporary. That will increase temperatures, including over the snowpack to melt it, but also put the country's growing regions back on a more positive track.

The kicker though, is that the pattern will still stay active going through the first half of May. Storm systems will come through with below-normal temperatures at times and overall, the entire process will be slower than many producers would hope for. It will also create more opportunities for precipitation over areas that are already wetter, leading to more limited opportunities for fieldwork and planting. 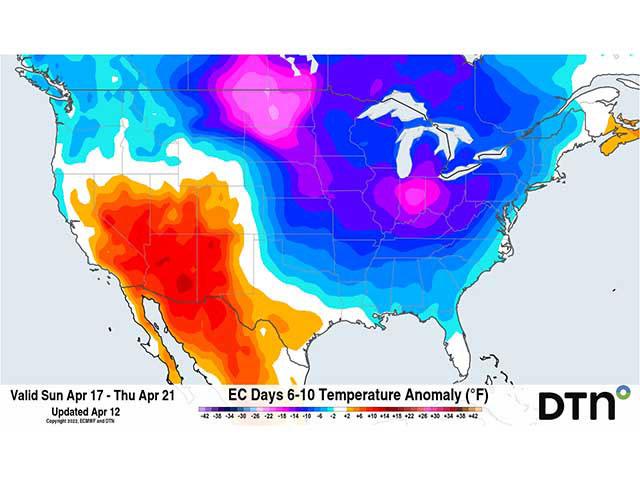