It seems like it was a long time ago the pattern was stable and less active. We have to go back to October, when temperatures east of the Rockies were record-setting, to see such a stable pattern. Stable does not mean inactive though, and many areas across the northern tier of the country found above-normal rainfall during that month.

Since then, the pattern has been almost ever-changing. That is not what we typically see during a La Nina event in the Pacific Ocean. La Nina tends to produce stagnant patterns by weakening the polar vortex. In response, we usually see large ridges of warm high pressure dominate some areas, while other areas get a taste of the Arctic under a cold trough of low pressure. But for some reason, we have not seen those disruptions in the polar vortex yet.

The result are features that pop up for short periods of time, on the order of a few days, then shift. Some of the time these features have not really shown up at all across North America, keeping the active pattern going.

Forecasts for the strength of the polar vortex continue to suggest that we will not see any disruptions until maybe the end of December. That means for at least the next couple of weeks, we should expect more transient features to continue affecting our weather in the U.S.

But more troughs are coming. There is a good line of energy from Alaska back into Siberia where troughs will dig into North America, but each one will develop further west than the last. One such trough will have some sticking power off the West Coast this weekend into next week. That will induce a strong ridge to develop east of the Rockies. The result will be very warm weather for a few days.

In fact, near-record temperatures may be felt in the middle of the country next week. But again, the temperatures stick around for a few days and will then cool back down as the ridge eventually breaks down.

An up-and-down November continues through December as cold weather this week turn much warmer next week. Without a strong disruption in the polar vortex during the next two weeks at least, temperatures should continue to ride the roller-coaster as each feature moves through.

The end of the month continues to look interesting. Models are suggesting that perhaps we could see a break down in the polar vortex. They are not unanimous, and in fact, the American, Canadian, and European models all continue to show values for the Arctic Oscillation (a name for the polar vortex) at a positive or near-zero value. Positive values indicate a strong polar vortex, negative numbers indicate a weak polar vortex with major disruptions. Since the values do not go negative, the disruption we see is likely to be weak and brief. But we could still see a colder regime working into North America for around a week going into the new year.

But until then, expect the pattern to continue changing every few days. 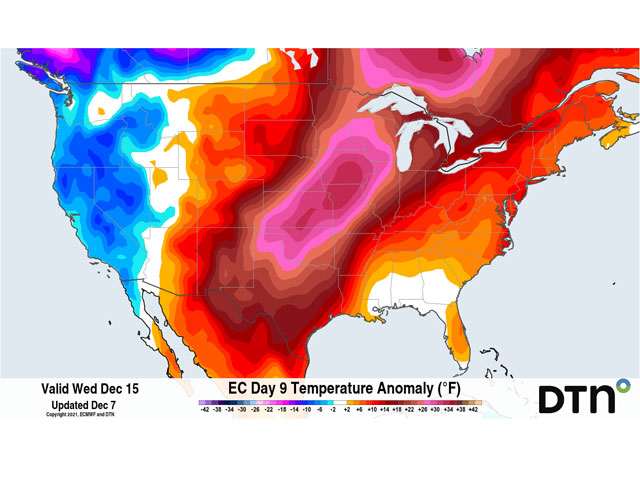