That shows up rather starkly in the crop conditions for both corn and soybeans. The states with the lowest combined good-to-excellent ratings are in the northwest (North and South Dakota and Minnesota) while states with the highest ratings are in the south and east (Nebraska, Kansas, Wisconsin, and Ohio). Ratings improved for Iowa and Illinois, but are still relatively low compared to normal for this time of year.

Dry areas are not going to see much improvement this week. There are some isolated showers and thunderstorms that will be possible through July 22, but coverage and amounts should be low. Temperatures well into the 90s will continue across the Northern Plains, Minnesota, and Nebraska.

There will be a slight change in the pattern afterward. An upper-level low pressure center off the coast of British Columbia will move across Canada July 22-25 and could remain in the Hudson Bay area through the following week to close out July. Meanwhile, the ridge that has been very persistent in the western U.S. will get pushed south but stay firm. It will also have a tendency to spread eastward next week.

This will allow temperatures to rise up into the 90s Fahrenheit for Illinois, Indiana and Ohio, something that has been fairly rare this summer. More saturated soils in the east will have better opportunity to drain and utilize the soil moisture for crop development, a factor that should be beneficial for reproductive corn and soybeans.

The ridge across the U.S. and the trough across Canada will force the storm track to go along the U.S.-Canada border region, offering multiple chances for rain across the Corn Belt. However, showers would likely be isolated to scattered, with many areas still getting missed. And with storms moving through the region rather quickly, it would be hard to pile up rainfall in the Western Corn Belt to reduce the drought.

But the rainfall may offer enough to stabilize conditions and offer timely moisture during reproduction. There is still time for both corn and soybeans in the northwest to produce fair yields, but it will likely take these periods of showers over the next few weeks to make that impact. Longer-range models do suggest that this could become the pattern for the first half of August as well. With temperatures expected to be above normal across the Corn Belt, the showers will be even more important to deal with the increased heat stress. 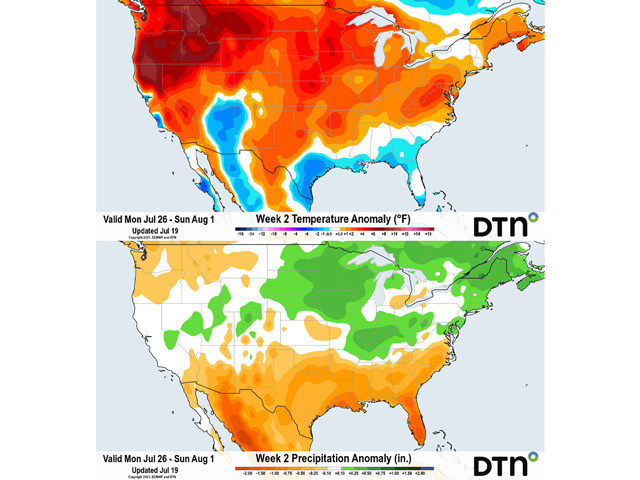