Heavy, flooding rains were noted from West Texas through Lower Michigan over the past week. Rainfall amounts of 2 to 5 inches have been common along a wide zone as a frontal boundary has stalled in the area since June 26. Embedded in that zone have been much higher amounts with double-digit rainfall amounts for portions of Oklahoma, southeast Kansas, northern Missouri and central Illinois. The rains have put some delays into the winter wheat harvest for sure.

There have also been good rainfall amounts outside of this zone in the Midwest and Central Plains. Another strip of moderate to heavy rain fell from eastern Nebraska through central Wisconsin, including drought areas in northern Iowa and southern Minnesota, but rain was not as consistently heavy with rainfall amounts more in the 1- to 3-inch range with isolated heavier amounts.

And, on the whole, rainfall has been disappointing yet again across the Northern Plains. Scattered showers certainly did fall across the region, but amounts were generally 0.50 inch or less with some isolated heavier amounts.

The disappointing showers continue to take a hit on spring wheat. Some shower activity was able to stabilize wheat ratings in the Dakotas; but, to be honest, they cannot go much lower. The real hit came in the neighboring states, where good-to-excellent ratings dropped from 43% to 21% in Montana and from 48% to 29% in Minnesota. That supported the overall drop in spring wheat good-to-excellent ratings from 27% down to 20%, still the lowest since 1988.

The forecast calls for much of the same dryness across the U.S. Northwest. The front that has been stalled will finally get a push southward late this week and weekend, moving down into the Gulf of Mexico by the weekend. This will set up a drier pattern for the rest of the week and into the next after the front moves through. Its continued presence across the south will mean more rainfall for West Texas, and the small areas of drought here are largely withering away. But for most of the primary crop areas, drier conditions are in store.

There is some hope, however small it may be. A weak frontal boundary is forecast to move from the Canadian Prairies into the northern tier of the country early next week. With the heat ahead of it, there could be some isolated showers across the Dakotas and Minnesota. But this is not expected to be a widespread rainfall event; the theme of the year so far -- isolated showers, locally heavy.

Since most of the rain that fell in North Dakota was on Sunday, after the reports were already taken in, the 10-point drop in the spring wheat ratings should not be surprising either. Temperatures continued to be well above normal last week until those rains moved in and soil moisture is almost at its bare minimum. Only 28% of North Dakota's topsoil moisture is rated adequate or better; for South Dakota, it is only 12%. That may be why the spring wheat ratings in South Dakota are currently the worst in the country at just 5% good to excellent.

It might have been a little surprising to see conditions falling in the Eastern Corn Belt, given last week's rainfall was pretty good for many areas. But that rainfall mostly came the last few days of the week and crops might not have been showing the benefits before the surveys were turned in. And the front half of the week was very dry and hot for many of those same areas.

The rains did not come without hazards, however. Stripes of moderate to heavy thunderstorms were very strong in several locations. Here are some of the more notable stretches of severe weather that occurred each day.

--June 19: Lines of wind damage from eastern Colorado through the Nebraska-Kansas border region.

--June 20: A bowing segment with confirmed tornadoes from northern Illinois through northern Ohio.

Reports of leaning and green snap on corn from wind damage and defoliation on soybeans from hail were gathered from these events. But sometimes you need to take the good with the bad. The rainfall, with many locations seeing over two inches across drought areas in the northern Midwest, will help some of the damaged corn and soybeans to recover.

I was not sure it would be named, but a tropical storm, Claudette, moved from Louisiana through the Carolinas June 18-21. The system produced some good rainfall across the Southeast U.S., putting an end to brief drought conditions in the Carolinas. The system also missed the Delta region, an area that continues to recover from the flooding rains earlier in June.

And another system is forecast this week and weekend. The setup is different from last weekend's storm system, but the effects will be somewhat similar. Two pieces of energy, one coming from a cutoff low off the California coast and another moving south through the Canadian Prairies, will move into the Corn Belt at roughly the same time Wednesday night. This should bring a couple of waves of rainfall through the northern half of the country into the weekend. Rainfall, however, will be more limited to the Central and Southern Plains and eastern half of the Midwest, leaving the Dakotas and Minnesota, areas we have been talking about drought for the last several months, out of the more consistent action yet again.

Models believe that a piece of the upper-level energy will become cutoff from the main flow this coming weekend or early next week, meandering in the Central Plains or western Midwest for several days next week. This will keep shower chances going for Iowa, Missouri and the eastern Midwest and Delta next week. Remaining drought areas could be reduced across portions of Iowa, Wisconsin, northern Illinois and Michigan.

And while models currently do not have much precipitation going next week farther northwest, where the conditions have been the worst for row crops, forecast uncertainty abounds. A ridge in the west, which has kept the Pacific Northwest hot and dry over the last week, will try to spread over the top of the cutoff upper-level low. If it succeeds, the low will have a chance to meander farther northwest. This would at least give producers in the Dakotas and Minnesota a chance, albeit small, to see some more rainfall. That chance may be an outside one, but the hope is there. 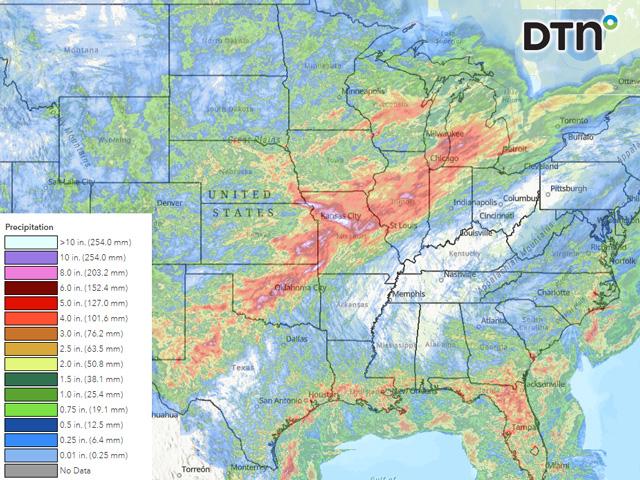