Crazy winter weather has been parading through the country during the last week or two. Recently, record low temperatures have been shattered up and down the Plains during the last two days. In the case of Dallas, a low of 5 degrees Fahrenheit on Feb. 15 beat the old low of 15 F set in 1909. Wichita Falls, Texas saw a low of minus 3 F on the same day, which beat the record low of 18 F set in 2007.

It's incredible to look at the numbers, but the impact could be equally devastating. Freezing rain and snow caused all sorts of havoc for transportation. In Texas, where these sorts of events are rare, the effect has been even worse. Many of us have seen video of the wreckage on I-35 in the Dallas-Fort Worth area that took the lives of six people on Feb. 11 and more accidents followed through the weekend, spreading across a large portion of the Deep South.

Widespread snowfall Feb. 14-15 added up to more than 6 inches for portions of Texas and Oklahoma northeast through Ohio and Michigan. The recent ice and snow have put a major strain on the electrical grid, producing rolling blackouts in Texas as wind generators and solar farms needed to be shut down.

The amount of snow covering the country is incredible when you look at a satellite image. According to the National Operational Hydrologic Remote Sensing Center, a division of the National Weather Service, 73.2% of the lower-48 states was covered in snow on Feb. 16. That is the current record, beating 70.9% on Jan. 12, 2011, since this data started to be recorded in 2003.

The Arctic air itself has caused concern about winter wheat damage. Snowfall should have helped protect the dormant crops across much of the Plains through the Midwest, but it may have come a little late in some locales. Portions of Kansas south through western Texas may have vulnerable spots as temperatures continue to fall near zero through Feb. 18.

And there is still one more system left to deal with. Currently in the southern Rockies, the system is bringing more snow to Texas and Oklahoma during midweek. The system will expand eastward toward the Gulf of Mexico Feb. 17, then northeast through Feb. 19 before leaving offshore.

As the next system pulls eastward, so too will the Arctic air. Since cold air is more dense than warm air, it will some time for conditions to fully moderate. Warmer, Pacific-sourced air will flow through the country behind this system. This will produce near- to above-normal temperatures come next week. However, models indicate this warmup may be brief across the northwest corner of the country into the Canadian Prairies as temperatures plunge back below normal after just a few days as we close out February. 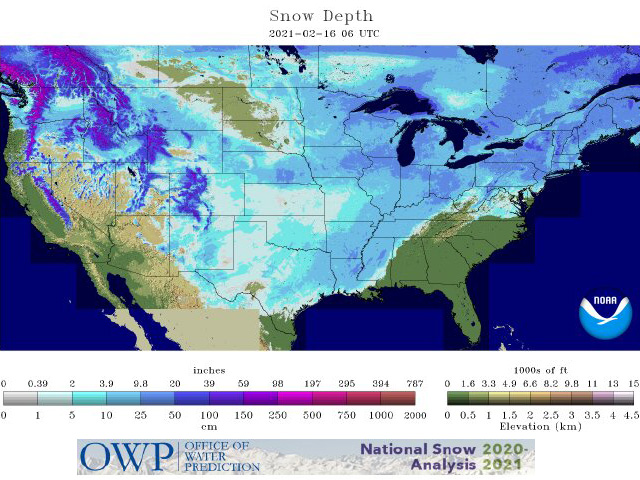