Weather problems that affected the 2020 U.S. corn yield deserve one final look before completely focusing on prospects for 2021.

You can find all the number details elsewhere, but the bottom line is that the final corn production figure of 14.2 billion bushels (bb) is 1.1 bb or 7% less than the initial estimate in August of 15.3 bb. The final national yield estimate of 172.0 bushels per acre (bpa) is 5% below the initial August estimate of 181.8 bpa.

A large-scale look at the 2020 corn crop year shows four headline weather occurrences that, taken together, resulted in the drawdown in U.S. corn production. Two of these were more far-reaching than the other two. However, they all played a part in affecting the final production. A note that this "Big Four" list is subjective; however, there are numbers that support their inclusion in this list.

-- Northern snow cover and prevented planting: Heavy snow cover from the end of 2019 hindered corn harvest in the northern edge of the Plains and Midwest well into 2020. In late February, the corn crop in North Dakota was still 40% unharvested. Snow melt and high residual soil moisture then contributed to a decline of 1.35 million acres -- a 43% decline -- in North Dakota corn harvested acreage in 2020 compared with 2019. The North Dakota corn output reflected this drop in acreage with more than 160 million bushels less than in 2019.

-- The Aug. 10, 2020 derecho: It is impossible to overstate the impact of the derecho on the 2020 U.S. corn crop. The storm destroyed crops, especially corn, along with grain storage facilities and trees, and caused extensive power outages. Damage was by far the worst in Iowa; central Iowa wind speeds exceeded 100 mph, meaning the storm attained hurricane strength. The World Meteorological Organization notes that the derecho destroyed or damaged crops on 5 million acres. The total loss from the derecho is estimated at $7.5 billion.

-- Late-summer 2020 drought: The initiation of a Pacific Ocean La Nina event may have contributed to drought development. Equatorial Pacific waters off the South America coast cooled to the La Nina threshold value of 0.5 degrees Celsius below normal during July. La Nina is the term used to identify the coupled ocean-atmosphere phenomenon that is the colder counterpart of El Nino, as part of the broader El Nino -- Southern Oscillation climate pattern. In the central U.S., summer temperatures averaged 1 to 4 degrees Fahrenheit above normal, with precipitation less than 75% of normal. August was especially dry. Iowa had its third-driest August on record; the southwest Iowa crop district had a record-dry August; Illinois logged its 13th-driest August.

-- Sept. 8-11 freeze: Sept. 8 through Sept. 11 featured a damaging cold wave over the north central U.S. A hard freeze with temperatures of 28 degrees Fahrenheit or lower moved over North Dakota and Minnesota Sept. 9. The cold outbreak was ill-timed in North Dakota with corn at the time just over half dented; Minnesota's corn was 86% dented when the hard freeze occurred. Freeze-level temperatures were recorded in Wisconsin and Michigan Sept. 10 and 11. This cold wave saw temperatures in the Northern Plains and Rockies go from 100 F to below freezing in two days.

Two major events, two significant events regionally -- they all contributed to lower corn production and yield in 2020 than the market expected at the start of the countdown to harvest. 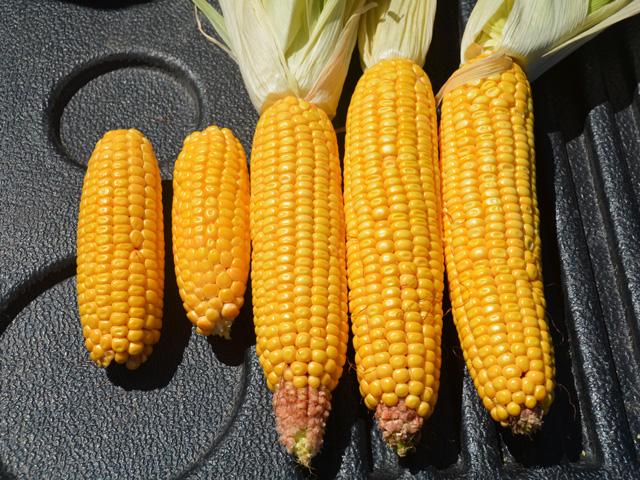