Over the past 12 days, an immense plume of dust from the Sahara Desert in North Africa has gathered and spread westward, all the way to the Caribbean islands and into North America -- a 5,000-mile trek. By some measurements, this is the largest Sahara dust cloud in 50 years.

The thick dust has notably affected air quality in the Caribbean islands.

Air quality deterioration spread across the Virgin Islands, Puerto Rico, Hispaniola, Cuba and the Yucatan Peninsula beginning over the June 20-22 weekend and moved into the Gulf of Mexico Wednesday, June 24. Skies turned milky white with the thick dust.

Impact on air quality is well-covered. But what might this dust cloud mean to crop weather? I posed that question to a group of my DTN weather colleagues. The thoughts that crossed my mind related strongly to: Do you see the potential for whether the Sahara cloud could possibly lead to a cloud seeding type of effect? We saw that back in 1993 from the residue left over from the eruption of the Mount Pinatubo volcano in the Philippines. Some of the very heavy flooding rain that occurred in the central U.S. during 1993 was attributed to the cloud seeding impact from the volcano.

My DTN colleagues agree that there will likely be some effect on crop weather; but maybe not that of cloud seeding. DTN Ag Meteorologist John Baranick offered this comment: "I wonder about the cloud seeding. ... But it's not like we're limited on condensation nuclei in the Midwest anyway. ... Otherwise, if it's a lot of dust, it could reflect more sunlight in the daytime and emit more longwave radiation at night, acting a bit like a cloud-blanket if the concentration is high enough."

Stephen Strum, DTN vice-president and long-range forecaster, brought these details to the discussion, noting that cloud seeding is not a rainmaker in and of itself:

"If you have a lot of condensation nuclei, it can actually limit rainfall since you end up with a lot more cloud droplets competing for available moisture, which keeps them all smaller and can make it harder to produce rainfall," Strum noted. "Cleaner tropical air that has fewer condensation nuclei produces larger cloud droplets which can reach rain droplet size faster (and) easier ... some dust probably boosts cloud development, but too much may suppress rainfall."

Strum also said that the height of the dust particle concentration will be important. "If more of the dust is say 10 to 15,000 feet up and less down towards the boundary layer, then those layers will likely warm from absorbing more solar energy, making the atmosphere more stable, and limiting convection as well."

Another feature with the dust plume is the expectation of reduced tropical cyclone development. This is a short-term feature, but it suggests a brief slowdown of what has been a very active tropical season so far.

For central U.S. crop areas, the most notable Sahara dust presence is expected over the Ohio and Tennessee Valley areas. The Delta, Southeast and Mid-Atlantic regions are expected to have at least some dust in the sky during these final days of June. 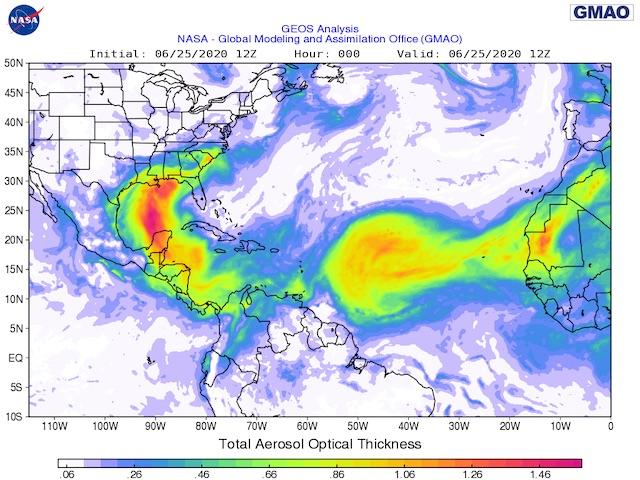