The weather recordkeeping summer months of June, July and August offer seasonal temperatures over the northern and central crop states in the United States in both the forecast presentations by DTN and the National Oceanic and Atmospheric Administration (NOAA). Stressful heat is not a feature in this outlook.

A combination of soil moisture levels and long-term trends is behind that shared summer temperature pattern forecast. As of April 21, the Northern Plains, Midwest, Delta, Mid-South and Southeast had soil moisture levels well above average in the 80 to 99 percentile. Areas in the Central and Southern Plains with lower-ranking soil moisture were benefiting from moderate to heavy late-week rain, indicating some easing of that moisture deficit.

Soil moisture at those high levels offers a buffer against significant heat due to evaporation. This feature is not lost in the forecast summaries: "High soil moisture was one of the factors for equal chances of below-, near-, or above-normal temperatures forecast across parts of the central U.S. this summer" the NOAA text discussion of the 90-day forecast pointed out.

The impact of an expected large row crop canopy is also a contributor to the prospect for a lack of strong heating. A Massachusetts Institute of Technology (MIT) study in 2018 determined that "there was a strong correlation, in both space and time, between the intensification of agriculture in the Midwest, the decrease in observed average daytime temperatures in the summer, and an increase in the observed local rainfall."

In addition, the MIT study noted that the crop canopy interaction with the atmosphere helps to mitigate significant heating. "With the combination of improved seeds, fertilizers, and other practices, between 1950 and 2009 the annual yield of corn in the Midwest increased about fourfold and that of soybeans doubled. These changes were associated with denser plants with more leaf mass, which thus increased the amount of moisture released into the atmosphere. That extra moisture served to both cool the air and increase the amount of rainfall, the researchers suggest."

As far as crop impact is concerned, both the DTN and NOAA forecasts suggest favorable conditions for corn and soybean production. The impact of drier weather in the southwestern Plains and in the northwestern U.S. points to unfavorable conditions for wheat, hay and pastures in the Northwest and for dryland cotton, hay and pastures in the Texas High Plains.

The MIT study cited in this blog item is available at this link: http://news.mit.edu/… 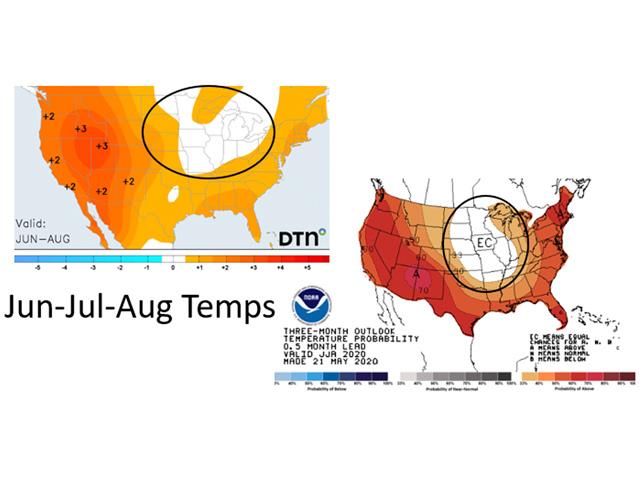