"Normally, we like to start closer to the end of September, but we knew we had the right amount of moisture, and we still have last year looming large in our mind," the Claflin, Kansas, farmer said.

The early start this year paid off, because a month later, Mother Nature turned off the tap and cranked the thermostat way down across much of the Southern Plains.

"We haven't had rain in about a month and a half," Krier said. "We're definitely in the beginning of drought here."

The cold, dry weather has allowed wheat planting to progress more rapidly than last year -- Kansas wheat was 86% emerged as of Oct. 18, close to the five-year average, and Oklahoma's wheat emergence was 89%, the same as its five-year average pace. But the lack of moisture and warmth has a downside: It has left many wheat plants underdeveloped and facing a higher risk of winterkill and injury as they head into winter.

DROUGHT DEVELOPS IN THE SOUTHERN PLAINS

"Drought has deepened in the Southern Plains, especially the southwestern Plains," explained DTN Senior Ag Meteorologist Bryce Anderson. "The Drought Monitor for Nov. 19 showed a portion of southwestern Kansas in extreme drought. The rest of southwestern Kansas has moderate-to-severe drought, with the remainder of the western third of Kansas through south-central Kansas in abnormally dry status. Oklahoma has abnormally dry-to-moderate drought conditions in the southwestern quarter of the state. Much of central and southern Texas along with the majority of Colorado is in moderate-to-severe drought."

"We haven't gotten one wheat acre planted on our farm, and there's probably less than 1,000 wheat acres in the county when there is usually 8,000 to 10,000," he said of Ottawa County, Oklahoma. "Most guys here will file prevent plant again."

But most Southern Plains growers are dealing with conditions more like Kenneth Rose, who farms in the western edge of the Oklahoma Panhandle and is watching his region descend into drought once again.

"We've had very little significant moisture since mid-July," he said.

He rushed to plant in mid-September after a sparse, half-inch rainfall. Those fields have emerged, but are growing very slowly, and his later-planted fields have yet to sprout.

"They are still waiting on rain," Rose said. "They're not emerged, just bare fields ready to blow this spring -- not pretty."

NO GRAZING OF GREEN WHEAT

The developing drought in western Oklahoma is already affecting the livestock industry, Rose added. "There is no grazing of green wheat anywhere around here this year," he said. "I put my weaned calves on milo stalks and hope that gets them through to the new year. There were so many weaned calves hitting the sale barns this fall that the price got really cheap."

In addition to dry conditions, Krier's late-planted Kansas fields have faced chilly weather since they were planted, which has also slowed emergence. So far, they have only a single leaf sticking up, he noted.

"Ideally, the wheat plant would have three to five tillers prior to the onset of the winter," he explained in a university newsletter. "Seedlings will have a better chance of winter survival if their crowns are well developed, in firm soil, about 1 inch below the soil surface."

Growers should keep a close eye on these fields come springtime, he cautioned. "If plants are poorly developed going into winter, with very few secondary roots and no tillers, they will be more susceptible to winterkill or desiccation, especially when soils remain dry," Lollato said.

"There's no discoloration from the drought yet, and they're not curling back yet, but it's not a nice lush, green leaf," he said.

They also got an early taste of winter, when conditions plunged below freezing in the second week of October. In far western Kansas, fields experienced temperatures as low as 13 degrees Fahrenheit on Oct. 11.

Growers may have spied some brown necrotic leaf tips in wheat fields that were up and growing at that time, Lollato noted.

"Brown, dried leaves do not necessarily indicate winter injury," he said. "The only way to assess the plant's condition following winter is to examine the crown (root) for winterkill."

"Over the past two months, the Southern Plains was chillier on the temperature side," he said. "October was overall the seventh-coldest month on record in Kansas and the 12th coldest on record in Oklahoma. Texas was near average, but the Panhandle was much below average on temperatures."

Lollato said growers could dig up wheat plants and examine the depth and condition of the crown root for some early warning signs of winterkill risk.

"If wheat is planted at the correct depth, about 1.5 to 2 inches deep, and is in good contact with the soil, the crown should be about 1 inch below the soil surface and well protected from the effects of cold temperatures," he said. "If the wheat seed was planted too shallow, then the crown will have developed too close to the soil surface and will be more susceptible to winterkill." 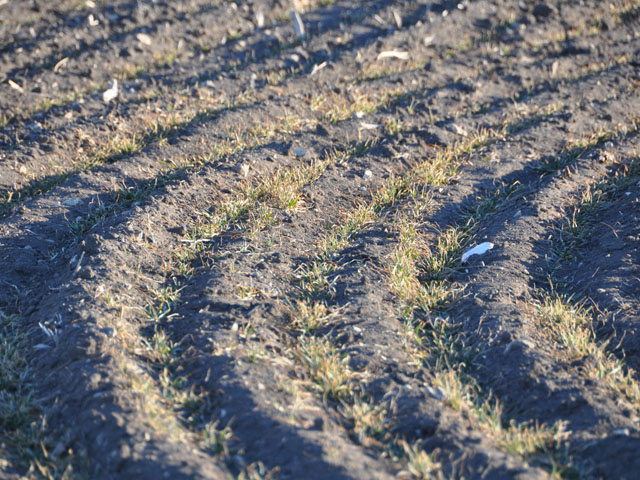