Topsoil moisture is running 50-55% short to very short in Indiana and Ohio, 55-65% short in east-central and southeast Iowa.

This is causing some stress to filling corn and soybeans. Soil moisture conditions are mostly adequate elsewhere in the Midwest and over the Northern Plains. Rainfall during the next six to 10 days is expected to average near to above normal over western areas, and near to below normal in the east. Temperatures will be variable, with conditions milder out ahead of systems, cooler behind them. No extreme heat is expected.

We continue to see very little change in crop ratings from week to week. Best ratings are in Nebraska at 70-74% good to excellent. Other good-to-excellent ratings: 55-60% in Minnesota, 60-65% in Iowa, 40-42% in Illinois, 30-32% in Indiana and Ohio. These poor ratings in the eastern Midwest reflect the very late plantings as well as some of the dryness that has developed.

The greatest threat to crops going forward will be an early freeze. Any freezing conditions in September would do significant damage. Even October freezes would cause some damage, especially during the first half of the month which is when the normal first fall freezes occur. Although we cannot make a forecast at this time as to when the first freeze of the season will occur in the Midwest, it appears very likely that some corn and soybeans crops will not make it to maturity before the first fall freeze occurs. 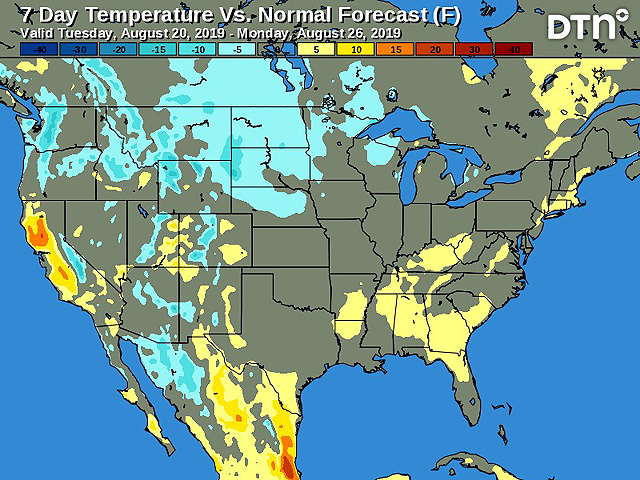