OMAHA (DTN) -- Farmers across the Corn Belt may see their best chances for getting in fields in the next seven days, even though conditions still won't be perfect.

Much of the region has seen buckets and buckets of rain all spring, leading to historically low planting progress for corn and soybeans.

Dennis Todey, director of the Midwest Climate Hub in Ames, Iowa, said during a special Midwest weather webinar on Thursday that the next seven days in the Corn Belt should be much calmer.

"Most of our region should be free of expected big rainfalls," he said.

Heavy rains have moved off to the East Coast after a ridge parked over the Corn Belt for weeks moved east, Todey said.

In an interview, DTN Senior Ag Meteorologist Michael Palmerino said he also sees a more favorable pattern in the next week to help Corn Belt farmers.

"We're looking a little bit at a shift in the pattern. We're not going to just shut things off with the blink of an eye; it's still going to be an active pattern. But the main emphasis we're seeing at the moment is that core of the heaviest rainfall is shifting off to the south and east," he said.

He added this is also very good news in the southeastern U.S. where they've been "having their own little mini-drought going on there during the last few weeks. It's been very dry and very hot, and they're about to get, even though it hasn't been a very long-term drought, I would certainly call it drought-breaking rains across the southeastern part of the country."

Palmerino noted the pattern shift started this week with the northwestern Corn Belt and Northern Plains having limited rainfall so more fieldwork could get done. As for the pattern for the next week in the Corn Belt, "It will still feature periodic showers, but most of these showers and thunderstorms will be scattered and in the light-to-moderate category, as opposed to being moderate to heavy."

Palmerino added, "I think this is really the final push to get that corn crop planted over the next week or two, and then follow up with whatever remaining beans are still to be planted."

"It's not going to be perfect, but it will be a lot better than it's been," said DTN Senior Ag Meteorologist Joel Burgio in an interview.

In the webinar, Todey said even if farmers can plant corn to nearly 100% across the Corn Belt, the outlook doesn't look favorable for the growth and maturity of the crop.

Currently, there is a 60% to 70% probability of below-average temperatures throughout the Corn Belt, as well as above-average chances of precipitation, he said.

"From a standpoint of crops this is not good," he said. "Maybe we have enough time for corn to mature with average conditions, but not as likely with cooler and wetter conditions."

In the hard-hit areas of Nebraska, Kansas, Iowa and Missouri, there is a slight increased risk of heavy precipitation from June 13-19, said Todey.

"We don't have a lot of capacity in our rivers," he said. "Even a little rain can cause problems."

Something that may have been forgotten during the heavy rainfall across the Corn Belt is how wet the winter season was in many areas of the Plains, Todey said. In parts of Nebraska, Iowa and Kansas, soil moisture levels are at 5 inches or more above average.

Below-average temperatures in the Northern Plains this spring mean areas of North Dakota and Minnesota still have frost and freeze conditions, he added.

"Farmers are in a Catch-22," he said. When soils are not allowed to dry out "basins are hypersensitive to future rainfall," Wolf said.

Where crops have been successfully planted and are emerged, crop conditions have been generally good, according to Todey, adding the rain has been beneficial to rangelands and winter wheat.

"There is some serious decision making to be made on planting," Todey said. "There will be a large number of acres not being able to plant."

As for weather ahead for the winter wheat crop, Palmerino said it still looks wet, although not as wet. He said they're still going to have near- to above-normal rainfall during the next week to 10 days.

While Palmerino doesn't think it will be as excessive as rains we've been having, such as some of the heavy rains that hit parts of Oklahoma and Kansas Thursday, "clearly it is still is a wet pattern. I still think we're looking at a crop that is going to continue to deteriorate and I think that more and more of this crop is going to be potentially more feed wheat as protein levels go down. 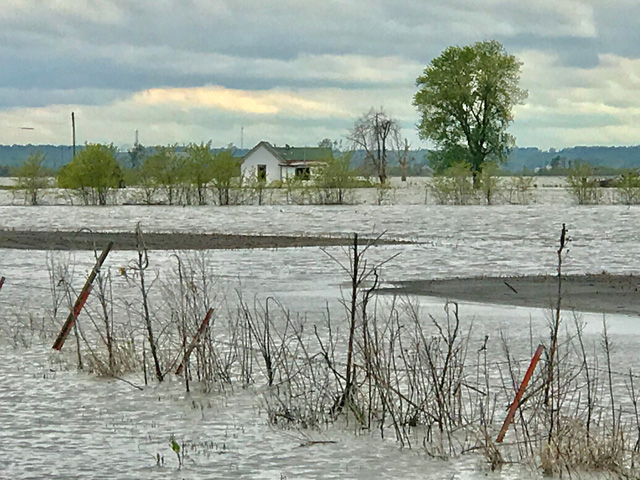