Weather patterns across the central U.S. show no easing of heavy rain potential going into the final two weeks of May, especially west of the Great Lakes. That means the continued chance for many acres of crops to not get planted in the 2019 growing season. It also means that river basin flooding, which began in mid-March, will either remain or even re-strengthen, possibly for another six weeks.

The cause for this ongoing wet forecast is a weather pattern that has not changed for almost three full months. "We basically have the same pattern as we did in March," said Ohio Basin River Forecast Center Hydrologist Jim Noel. "There has just been a parade of storm systems coming off Asia toward North America. And, there's nothing to indicate that that's going to change."

Parades of storms lead to ongoing flood risk. "There is a 50-50 chance of renewed flooding in the Mississippi and Missouri basins along with the lower Ohio River basin," Noel said.

Rainfall measurements are historic. Much of the mid-Mississippi Valley and the lower Missouri Valley have had floodwaters rise to new record levels, surpassing the previous records set during the "Great Flood" year 1993. That year is getting cited more and more with each passing rainstorm.

"Are there comparisons with 1993?" asked NOAA's Doug Kluck. "Yes -- both years were and are wet; they're not similar meteorologically, but the results appear to be similar."

Dennis Todey, USDA climate hub director in Ames, Iowa, believes that what happens in June and July will determine how 2019 stacks up compared with 1993. "1993 stayed very wet throughout June and July. It's hard to tell if this year will be as wet," Todey said.

Nonetheless, acreage loss -- possibly big acreage loss -- is seemingly assured by the wet spring of 2019. "There's a lot (of fields) that will likely not get planted," Todey said. He also noted that wet conditions bring on greater chance for disease to harm crops in the field -- notably, winter wheat. "There certainly can be disease pressure, because there is more time for water to sit on crops, keep them wet and increase disease potential," Todey said. "Also, crops are not as healthy because of being wet."

Regarding summer, forecast indications have the Plains and western Midwest -- where conditions are saturated -- trending cool, near to below normal on temperatures, along with having a better-than-average chance of staying wet. There's where the 1993 comparison gets stronger. It makes what happens in the way of actual rainfall through the end of May critical for setting the stage for summer.

"It's going to be an interesting next two weeks," Kluck said. 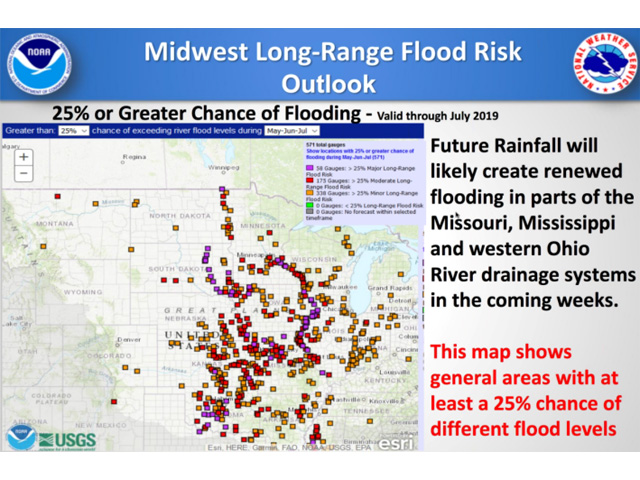