Significant flood potential continues across much of the Midwest. We continue to see a very active rainfall pattern across most of the Midwest at least through the middle of April with the possible exception of northwest areas.

The core of the heaviest rainfall will be along and south of Interstate 80. This would include central and southern portions of the western Midwest and all of the eastern Midwest.

It looks like there will be two rain events a week, some of which will produce moderate-to-heavy totals. The limiting factor for rainfall will be the speed of movement of these storm systems. Faster movement -- less rain, slower movement -- more rain. Except for the fact that there is still frozen ground in the northwest Midwest and snow to melt in the Northern Plains, you could make a case that under the current rainfall pattern, producers in the northwest Midwest and Northern Plains could get some fieldwork underway before areas further to the south.

There is still no indication of when significant fieldwork can begin in the Midwest as the combination of cold air in Canada and an active southern branch of the jet stream (El Nino) over the U.S. maintains a very unsettled weather pattern.

Adequate-to-surplus soil moisture in the Southern Plains winter wheat belt is very favorable to the crop which has broken dormancy and is developing. Good-to-excellent crop ratings in Kansas are up by 3 percentage points from a week ago. Topsoil moisture in Kansas is only 1% short. A year ago, it was 68% short to very short. Upcoming weather will continue to provide enough moisture to support the crop.

Our calculation of the sea surface temperature departure in the eastern equatorial Pacific for the month of March 2019 was 1.5 degrees Celsius above normal. This is up from a plus 1.3 in February.

The weather pattern remains quite favorable for developing second-crop corn in central Brazil as episodes of scattered showers and thunderstorms continue. The crop has been able to take advantage of early planting and an active second half of the rainy season.

Corn and soybeans in southern Brazil and central Argentina are in the late-fill, maturing and early harvesting stages. Soil moisture is favorable for late-filling crops. Episodes of scattered showers and thunderstorms will cause some harvest disruptions, but nothing to be concerned about at this time. 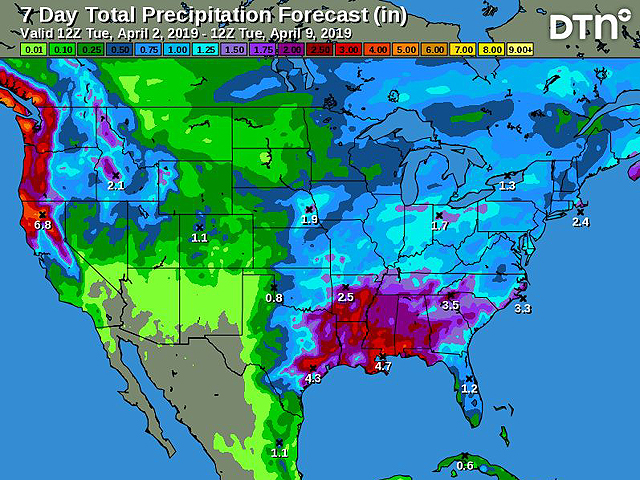