The annual Arctic report card issued by the National Oceanic and Atmospheric Administration (NOAA) has some shocking details of how polar region warming is start to hurt the native plant and animal life, along with widespread melting of ice cover.

New studies and reports issued this week at a major Earth sciences conference paint a harsh image of dramatic warming in the Arctic and Antarctica. Alaskan scientists described never-before-seen melting and odd winter problems, including permafrost that never refroze this past winter and wildlife die-offs.

The National Oceanic and Atmospheric Administration Tuesday released its annual Arctic report card, detailing the second warmest year on record in the Arctic and problems. The problems included record low winter sea ice in parts of the region, increased toxic algal blooms, which are normally a warm water phenomenon, and weather changes in the rest of the country attributable to what's happening in the far North.

"The Arctic is experiencing the most unprecedented transition in human history, said the lead author of the report, Emily Osborne, chief of Arctic research for NOAA.

The report also noted that "Continued warming of the Arctic atmosphere and ocean are driving broad change in the environmental system in predicted, and, also, unexpected ways."

One of the most noticeable problems was a record low sea ice in winter in the Bering Sea in 2017 and 2018, scientists said.

Report co-author Donald Perovich of Dartmouth College noted that back in February, the Bering Sea "lost an area of ice the area of Idaho."

Perovich said that the extent of ice melt is a problem because the oldest and thickest sea ice is down 95% from 30 years ago. In 1985, about one-sixth of Arctic sea ice was thick multi-year ice, now it is maybe one-hundredth, Perovich said.

Marine biologists are also noting a loss of wildlife. Gay Sheffield of the University of Alaska Fairbanks lives in Nome. She told the American Geophysical Union conference in Washington, D.C. that, when she left her home, "we had open water in December." Wildlife is dying with the "massive environmental change" ice-free situation. What is called a "multi-species die-off" of ocean life is being recorded, including the first spring mass die-off of seals along the Bering Strait.

A lack of winter sea ice is also leading to winter-season birds building fewer nests. One species, the black guillemot, had more than 200 nesting pairs on Cooper Island in the past. This past winter, ornithologists recorded only 85 pairs, with only 50 laying eggs -- and only 25 had successful hatches.

Other wildlife impact includes a 55% drop in the herd size of caribou and wild reindeer, because warming allows greater infestations of flies and parasites.

Permafrost ground that stays frozen for years and years is also shrinking. A research scientist identified 25 spots in the Arctic that never froze this year after constantly being frozen.

Algal toxins moving northward and infecting birds, mammals and shellfish are also showing up. And, as this blog space has noted previously, the warmer Arctic and melting sea ice has been tied in to changes in the jet stream pattern that have brought extreme storms to the contiguous U.S.

In addition, the newest space-based radar in the National Aeronautics and Space Administration (NASA) lineup, Icesat 2, has found thinning ice in Antarctica. The Dotson ice shelf in Antarctica has lost more than 390 feet (120 meters) in thickness since 2003, according to research scientists.

And, in a surprising finding, East Antarctica is showing ice melt. Four glaciers at Vincennes Bay have lost 9 feet of ice thickness since 2008. Antarctica ice loss is tied to a possibly massive rise in future sea level. 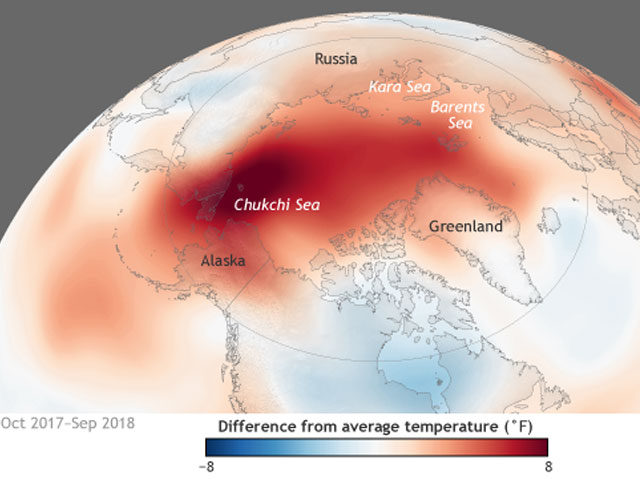 Bryce Anderson
12/18/2018 | 5:27 AM CST
Regarding scientific consensus on warming--from the Skeptical Science.com website: "A survey of peer reviewed scientific papers from 1965 to 1979 show that few papers predicted global cooling (7 in total). Significantly more papers (42 in total) predicted global warming... The large majority of climate research in the 1970s predicted the Earth would warm as a consequence of CO2. Rather than 1970s scientists predicting cooling, the opposite is the case."
MIKE` WILHOIT
12/17/2018 | 12:29 PM CST
https://realclimatescience.com/2018/12/fraud-in-the-national-climate-assessment-part-2/
Meral Martin
12/16/2018 | 1:30 AM CST
Ordered Peter Wadhams book A Farewell to Ice - A Report From The Arctic. Very disturbing .. Farmers are on the front line