One of the highlight subtopics in the latest U.S. Climate Assessment report, which was released in late November 2018, is a summary on precipitation trends, both observed and forecast. The report's precipitation summary has some lines that will ring loud and clear to many crop producers:

"Annual precipitation since the beginning of the last century has increased across most of the northern and eastern United States and decreased across much of the southern and western United States. Over the coming century, significant increases are projected in winter and spring over the Northern Great Plains, the Upper Midwest, and the Northeast. Observed increases in the frequency and intensity of heavy precipitation events in most parts of the United States are projected to continue."

We definitely had those heavy precipitation events as part of the 2018 growing season. Heavy, flooding rain back in the spring caused some major delays in corn and soybean planting over large portions of the western and northern Midwest. There were some strong resemblances to some other recent difficult planting seasons, such as 2008 and 2011, when heavy rain also slowed down field work and planting. Rain did continue during the growing season. July had near- to above-normal precipitation over the majority of the Corn Belt, and August brought generally abundant amounts of moisture as well -- except, again, in the southwestern Corn Belt.

However, that heavy-precipitation trend refused to let up. September, October and November all featured occasions of heavy precipitation, mostly as rain, which in many areas caused either big harvest delays or losses in either crop quality or actual physical crop loss -- or both. And, hurricane damage -- notably from Florence and Michael -- added to the harsh impact of extreme weather occurrences. Total crop production is large, but there were some big area losses.

As for the future, the U.S. Climate Assessment chapter on agriculture has this projection: "Heavy precipitation is becoming more intense and more frequent across most of the United States, particularly in the Northeast and Midwest, and these trends are projected to continue in the future." With that scenario, it's likely that upcoming growing seasons have more of these extraordinary, challenging rainfall events ahead. Such a trend will keep the pressure on for producers to be able to get a lot done in a short time mechanically. And, the projected continuation of storm loss potential means that such coping or adaptation measures will continue to be important. They include crop insurance for helping growers manage financially; but also erosion prevention methods to stop soil and crop input loss, and more drain tile installation and upgrading as producers try to keep up with the threat of disruption and acreage loss posed by the regime of heavy, extreme rain. 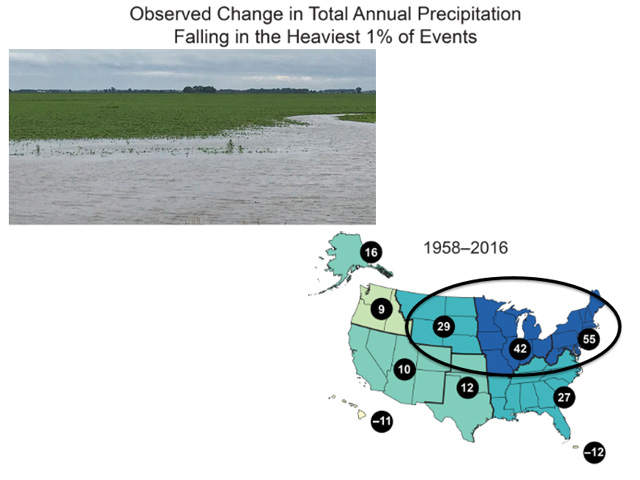