Snow and rain continues to cause problems for the harvest effort across the Canadian Prairies. This began a few weeks ago and after a brief break in the pattern we have seen additional significant precipitation across the region early this week.

The middle two weeks of September featured moderate to locally heavy rain and snow in many areas. The snow melted relatively quickly, but the wet conditions caused a slowdown in harvest progress at the time. The last week of September featured a drier period with fairly low temperatures across the region. Improvement for the mature crops and harvesting during that week was limited in nature.

The snow and rain redeveloped early this week. We have seen moderate to heavy precipitation amounts from central and southern Alberta through southern Saskatchewan to Manitoba with this latest system. This included a record daily snowfall, for the month of October, in the Calgary area.

However, even outside of Calgary, moderate to heavy precipitation totals were widespread in the areas mentioned. Delays are likely to continue due to this recent system for a while. The snow, this time, might be a little slower to melt under a well-below-normal temperature pattern. I expect that it will eventually melt, unless of course we see more snow added to the area.

On a somewhat more positive note, we have seen the northern part of the Canadian Prairies region continue under a drier weather pattern during this week. This may help to improve conditions for the harvest in these locations while the areas farther south continue to experience delays.

The below- to well-below-normal temperature pattern is expected to continue for at least the next seven days. The storm track has shifted south somewhat, at least in western areas. This might allow some improvement in the conditions for harvest in the west and north areas, slowly, during this period. The southeast areas are still in an area somewhat at risk for significant snow or rain events during this timeframe. Manitoba has more of a heavier snow, rain chance than most other areas of the Canadian Prairies crop belt.

The longer-range outlook shows a few changes in the upper level pattern over North America that might lead to improving weather in the Canadian Prairies for the second half of October. The high latitude blocking pattern that set up and allowed much colder weather in the region during September appears to be weakening. We see the strong ridge that has been over Alaska and northwest Canada weakening and moving towards Siberia. This was the source region for the extremely cold conditions that we have seen the last several weeks.

This does not necessarily mean warm weather for the area but it should take the edge off the very cold conditions currently in the region. We also note that the strong eastern U.S. ridge might be shifting a little further to the east. This ridge has been responsible for sending warm air with moisture northward through the central U.S. This moisture flow when it clashed with the cold in place over the Canadian Prairies lead to the heavy precipitation events we have seen. An eastward shift to the ridge, if verified, would allow an eastward shift to the moist flow and the storm track. So, instead of the Prairies getting hit with the precipitation, the Midwest and the Ontario and Quebec areas Canada would see these storms.

I would like to caution, however, both the weakening of the high latitude block and the eastward shift to the eastern U.S. ridge are new on the maps during the past one to two days. This means that this longer-range outlook it somewhat uncertain. 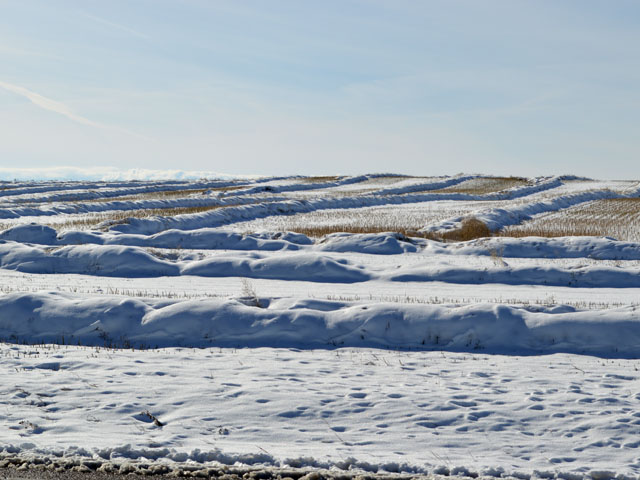