Ratings are essentially unchanged in Illinois and unchanged to a little better in Indiana and Ohio.

Ratings clearly seem to be following the rainfall patterns. Whether these ratings translate into changes in crop production are hard to say. Well-established crops at this time of the year can tap subsoil moisture especially when there is no persistent hot weather. Also, crop development is running ahead of normal, which should translate into diminishing moisture needs as crops mature.

The overall weather pattern during the next six to 10 days will feature a trough over the interior western U.S. and a ridge over the eastern U.S. Disturbances will eject eastward from the trough in the western U.S. moving up and over the ridge in the eastern U.S. The strength of the ridge and the speed of movement of these systems will dictate the amount of rain that occurs in the central U.S.

With crop development running ahead of normal in all areas and the expectation of near to above normal temperatures continuing through the end of the month, it appears unlikely there will be much concern about an early freeze if there is one, affecting crops this fall. It's too soon to say what harvest weather will be like. 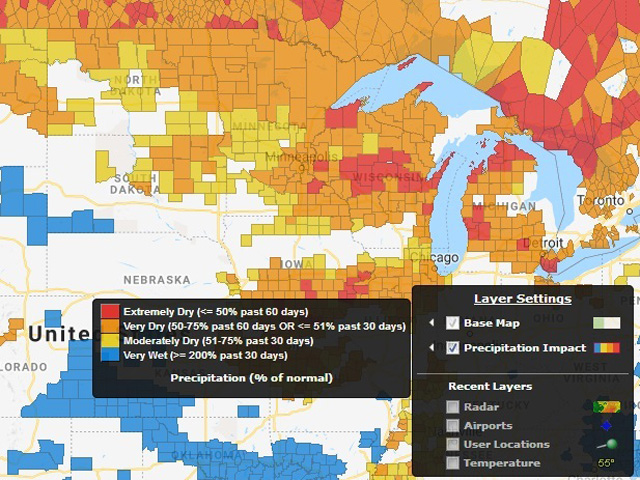 Darle Baker
8/27/2018 | 5:43 AM CDT
I appreciate your honest weaver evaluations. It appears that you havenâ?™t sold out out to the global warming hoax which uses temperature norming by using temperatures on the. backside of strong high pressure systems. Global cooling could be â?œprovedâ? by using front side high pressure temperature and norming these temperatures. Thanks Darle Baker note: pass this on to Bryce.