About ten days ago, a producer in the northwestern Corn Belt posed the question of whether any checking was done to verify whether rainfall forecasts actually verified. This producer was taking issue with a seven-day rainfall forecast total of 1.5-3+ inches for a portion of the Midwest approximately bounded by U.S. Highway 20 across Iowa, between Sioux City and Dubuque; and Interstate 90 across Minnesota, with that boundary continuing into Wisconsin. It's no secret that the western and northwestern Corn Belt have had some stressful heat and dryness during the past month.

I kept this comment in the back of my mind, and as July comes to a close, we have a pretty good idea of how that forecast verified. And, while rain did occur, the heavy amounts generally were west of the targeted area. The north-central Midwest that was indicated to get that 1.5-3+ inches of rain mostly received only about one-tenth to one-quarter of an inch -- a long way from what had been expected.

That's not to say that rain did not occur, however, because there WAS rain and some heavy amounts at that. North-central Nebraska, south-central South Dakota, and eastern Colorado all had in excess of one inch precipitation, when forecast amounts were generally less than that. And, very heavy rain and flash flooding were noted in western Missouri, including the Kansas City, Missouri, metropolitan area. Rainfall in this flood zone totaled more than four inches.

Why this forecast had such an actual departure from the called area and amounts is the stuff of special papers and deconstruction. But, there were two differing and intermittent sources of energy for storm formation that were around last week -- one being the southwestern U.S. monsoon, which has been a very active player in that part of the country for several weeks -- and another being a series of disturbances moving southeast out of the Canadian Rockies. Along with those disturbances, of course, was a very hot bubble of high pressure over the Southern Plains, Delta and the western Midwest. There were definitely going to be some holes punched in that hot-air bubble, but the punching happened farther west than was forecast -- and, once the action got going in the central Plains, that's where the rain tended to focus.

Bryce Anderson can be reached at bryce.anders@dtn.com 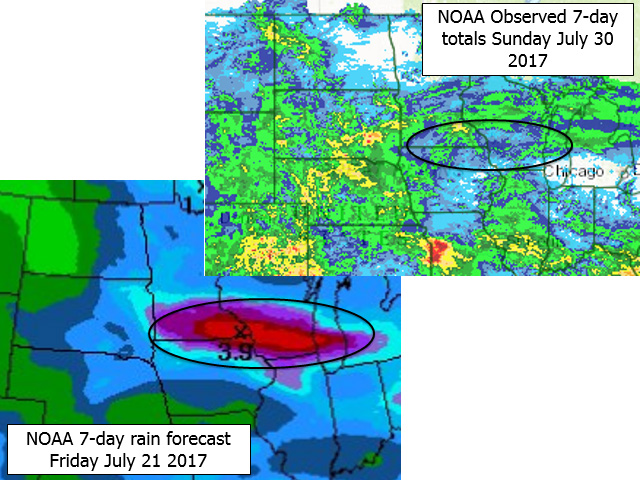