Scattered showers are indicated in the forecast for the Canadian Prairies during the rest of this week through the weekend. The rain looks to be of a light to locally moderate nature. This is likely to be considered mostly beneficial for early development of crops, especially through southern and eastern areas. However, in the northwest areas rainfall will continue to delay spring fieldwork and planting.

The forecast models covering the period Sunday through next Tuesday are showing the potential for heavier rainfall in some locations. The U.S. model is looking fairly wet for many areas. Forecast seven-day rainfall totals in the U.S. model sport an average of 2 to 5 inches (50 to 125 millimeters), covering much of Alberta, west and north Saskatchewan and parts of Manitoba. If verified, this could mean more problems for farmers in central and northern Alberta, including the Peace River area. Fields that are already very wet could be even wetter under this forecast outlook. Rainfall elsewhere in the region would be either neutral or beneficial to developing crops, especially with an expected warm temperature outlook.

The European model, on the other hand, shows a track on the rain system that would be further south and east, and somewhat faster moving than what the U.S. model is suggesting. This model suggests less rain chances overall in the region but especially for the northwest sector. The European model still has a fairly wet trend for south and east areas, but the further north and west locales would be drier.

I support a forecast that is somewhere between these two extremes. This leaves us with a rain forecast that would favor earlier-planted crops in the south and east areas, and a somewhat drier forecast that would help improve conditions for planting in northwest areas. I also expect a near- to above-normal temperature pattern that would also be mostly favorable for developing crops. 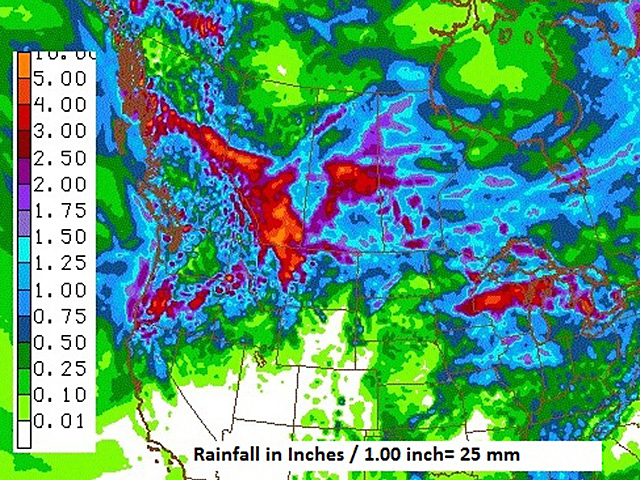