In discussion about crop weather conditions for the central U.S. this year, a wet pattern in most areas is the number-one subject. Placing second, but not that far behind, is conversation about growing degree day totals. After all, once corn and soybeans are seeded, the weather conditions for those crops to develop, as indicated by growing degree day totals, are paramount.

And, up to this point, growing degree day totals are getting some attention and concern. From the Great Plains through the western Midwest, GDD totals so far this season are not exactly piling up. Totals from April 1 through May 20, as compiled by the National Oceanic and Atmospheric Administration (NOAA) are from near-average to 100 units below normal. The eastern Midwest has totaled more GDDs and has general totals of more than 100 GDDs above normal. The interpretation of these totals is generally in the way of an indication of less-than-desired crop development conditions.

However, a comparison with the GDD totals for the same period a year ago shows that all is not lost in terms of crop potential from the GDD standpoint. For the same period in 2016, the growing degree day totals for the entire central U.S. -- not just a portion -- were around 200 GDDs below normal. And yet, we know how yields turned out last year, with new records being set.

The message here is, once again, that there is still a long way to go in the 2017 crop season. Would we like to see growing degree day totals have near-normal numbers? Certainly. But, below-normal totals do not automatically translate to disappointment at harvest.

For another comparison -- back in 2012, the growing degree day totals for this same time frame, April 1 to May 20, came in at between 200 and 300 GDDs above normal in the Plains and the western, central and southern Midwest, with near-normal totals in the eastern Midwest. The result of that season is still fresh in our memory -- and is a reminder that what things may appear like in spring do not necessarily hold true all the way through fall. 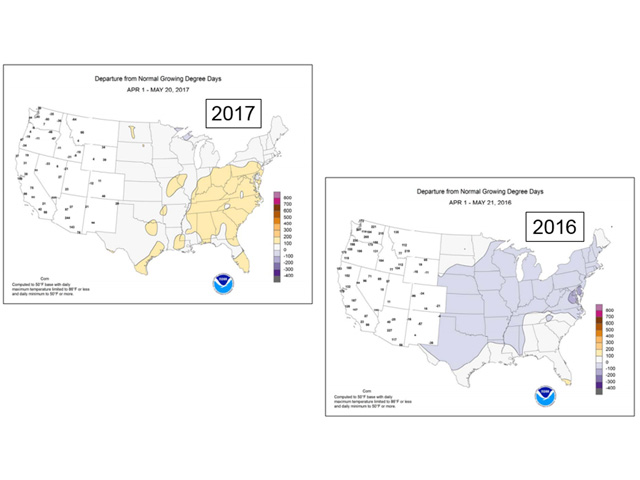