An early winter type storm has brought rain and a change to snow to key growing areas for spring-seeded crops through the Canadian Prairies since the weekend.

This rain intensified and in some cases changed to snow early this week. Precipitation totals for the 72-hour period ending early Wednesday morning have reached 1 to 3 inches (25 to 75 mm) across southern and eastern Saskatchewan and in Manitoba.

Precipitation totals elsewhere in Saskatchewan have totaled 0.25 to 1 inch (6 to 25 mm) during this time frame while crop areas of Alberta had fairly light totals following the weekend rains.

Colder weather being drawn into this system from the north has caused a change to snow for areas of west and North Saskatchewan overnight and weather warnings of up to a foot of snow in places. Temperatures prior to this rain and snow event had been running above normal so it is likely that much of the snow, so far, is melting. Wet weather and conditions has brought fieldwork to a standstill early this week.

The weather during the most recent week, up to Sept. 30, was mainly dry and warm. This allowed improvement to harvest conditions following some heavy rains of the prior week. Reports out of Saskatchewan indicate that the overall harvest reached 70% as of Sept. 26, 2016. Harvest progress has now fallen behind both the five-year average and last year's harvest progress to a similar date.

The storm system that brought the rain and snow to the region is expected to linger during Wednesday and to a lesser extent during Thursday. The region should turn drier and colder following this precipitation later Thursday and during Friday and Saturday.

The field conditions for the harvest will slowly improve at the end of this week and into early next week. The cold conditions mentioned will bring a hard freeze to most crop areas of Saskatchewan later this week. This may allow fields to firm up and could favor harvest progress for a time. However, cold weather also slows the drying process for crops in the region.

The extended outlook for next week is somewhat uncertain at this time. Weather models suggest a fast-moving system may bring another chance for precipitation to the area later in the period. The system does not appear to be as significant as the one that hit this week or the one from two weeks ago, but it will bear watching. In either case, look for some improvement in harvest progress next week, ahead of that system. However, harvest progress for the balance of this week will be fairly limited. 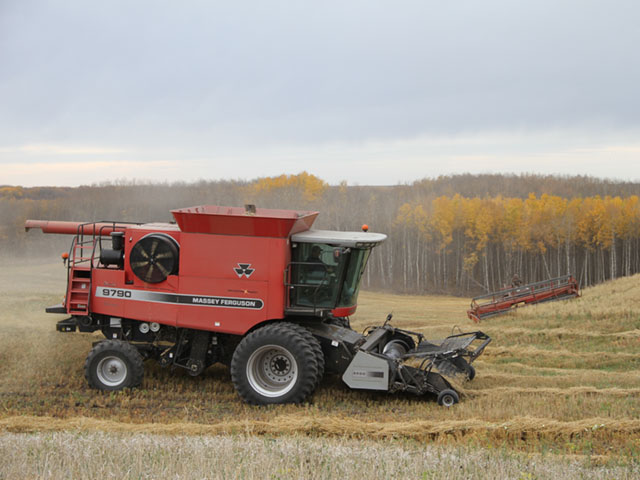