Following is an excerpt from the NOAA Climate.gov website, where climate scientist Michelle L'Heureux posted a discussion on how forecast calls for a strong La Nina in the equatorial Pacific Ocean (which would feature notable cooling of the equator-region waters) have backed away from that stance. Latest forecasts now call for Pacific temperatures to flatten out at the La Nina threshold of 0.5 degree Celsius below average through January, and then actually get warmer into weak El Nino category by next summer 2018.

"The strong El Nino growth during 2015 was pretty well predicted by...(forecast) models. There is some quibble, but this is an overall accurate forecast and the most skillful since the last historically large El Nino in 1997-98.

The peak strength of Nino-3.4 during November 2015... was generally under-predicted by most models. In other words, what actually occurred was warmer than what was predicted!

Overall, the demise of the El Nino was also well-predicted. A few models hung onto the event a little too long, meaning that the peak in the model prediction occurred after the peak in the observations. Not surprisingly, these mistimed predictions of peak strength are especially a problem in forecasts made further into the future (6-12 months ahead). The unofficial term for this is "target period slippage."

The previously predicted La Nina is clearly in trouble. We laid out some possible reasons in an early September blog post, but the number one reason forecasters now slightly prefer ENSO-neutral conditions (55-60 percent chance) stems primarily from this set of models and how month after month since April 2016, they have gradually predicted less cooling. Could this weakening trend abate? Sure it could. Could we still end up with La Nina? Yes, there is a 40% chance of this, though if it emerges it is likely be very marginal or borderline.

The cool Nino-3.4 conditions predicted for the summer months of July-August 2016 were way too cold in most models. In other words, the models were more aggressive forecasting La Nina than what recently occurred. We don't know why La Nina did not emerge during the summer, despite the fact that theory indicates the odds of La Nina are elevated after strong El Nino events. Is it because the below-average subsurface temperatures across the equatorial Pacific Ocean were weaker than anticipated? Was it because we still have yet to see clear interactions between the ocean-atmosphere? (there are some weak hints as of early September). We don't really know.

What we do know is that ENSO will forever be keeping us on our toes, so stay tuned." 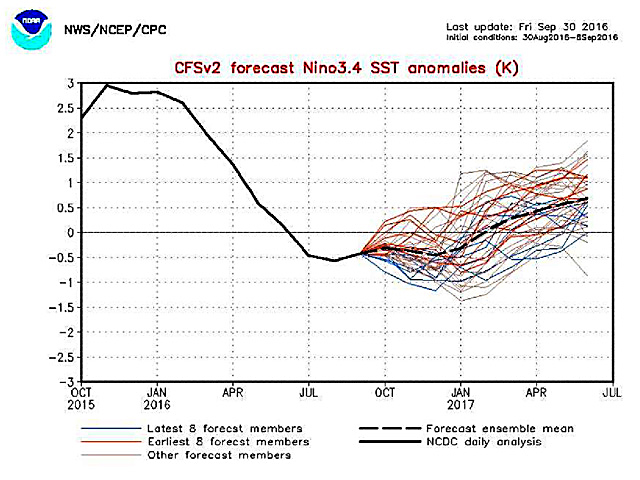