Following is a selection from the latest rundown of corn yield projections in the University of Nebraska-Lincoln Cropwatch corn production study. The study is in cooperation with land grant universities and specialists across the Corn Belt. The rundown is as of Wednesday, September 7, 2016.--Bryce.

Physiological maturity (black layer) has been reached at about half of the rainfed sites. These sites are in the southern Corn Belt. Grain filling continues in the other half of rainfed sites, with most corn at dent stage. Irrigated corn has matured (Kansas) or will reach maturity soon (Nebraska).

Forecasted yields for rainfed corn indicate near-average yield at about half of 37 rainfed sites. These sites are mainly in the southern and eastern Corn Belt. Above-average yields are expected for 11 of the rainfed locations: western and central Nebraska, central-east and northeastern Nebraska, southwestern Iowa, and northwestern Missouri, eastern North Dakota and western Minnesota, and central Illinois. In contrast, the forecasts indicate below-average yield at five sites: southeastern Nebraska, and across a southeast-northwest transect in Iowa.

Overall, our Sept. 7 forecasts suggest a near or slightly above average yield for the entire Corn Belt, with no clear indication of a record yield crop in 2016. Our forecasts indicate a high probability of near-average corn yields in 2016 in about half of rainfed sites, with above- and below-average yields expected in the rest of the locations. Slightly above-average yields are likely for irrigated corn.

Note that these forecasts do not take into consideration problems with stand emergence, hail/flooding damage, replanting situations, disease, or nitrate leaching. In fields negatively affected by these constraints, actual yields will be lower than estimates provided here.

It is important to keep in mind that yield forecasts are not field specific and, instead, represent an estimate of average on-farm yield for a given location and surrounding area in absence of the yield-reducing factors mentioned here. Likewise, crop development stages and forecasted yields will deviate from the ones reported here in fields with planting dates or hybrid maturities that differ markedly from the ones used as the basis for these forecasts.

The full report is at this link: http://goo.gl/… 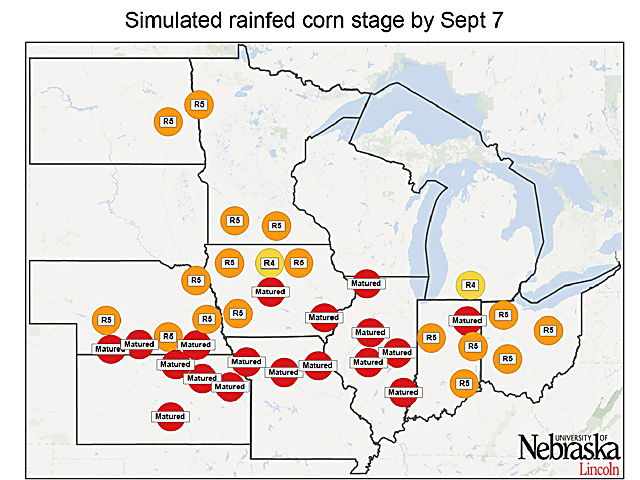