Following is an excerpt from a blog item by NOAA scientist Emily Becker on how the Pacific Ocean is acting regarding either Neutral or early La Nina conditions as August got underway. -- Bryce

"It's August already, El Nino is long gone, and we're still stuck in neutral. Is La Nina on the way? And is anything interesting going on in the tropical Pacific?

"Currently, forecasters think there's a slightly better than 50% chance of La Nina developing in August -- October and then a 55 to 60% chance during the winter. Right now, it looks like if La Nina does manage to form and last the five consecutive, overlapping seasons necessary to qualify as an ENSO (El Nino Southern Oscillation) event, it's likely to be a weak one.

"Let's start by checking in with current conditions. During July, sea surface temperature in the Nino 3.4 region of the tropical Pacific was minus 0.21 degree Celsius (minus 0.38 degree Fahrenheit) below average, according to ERSSTv4, the dataset we use for all our forecast verification. You may have also seen the monthly value for July from the OISST dataset, which was minus 0.49 degree C below average. Which one's right?

"In short, these two datasets have different geographic detail: ERSSTv4 is lower resolution, while OISST has a finer grid with more spatial detail. Since the current area of colder-than-average water is a narrow strip along the Equator, the average over the Nino3.4 region can be different depending on the dataset.

"I realize I haven't answered the question "which one is right?" That's because they both are -- they're just different. We use the ERSSTv4 for all our long-term monitoring, because it has been carefully quality-controlled and extends back to 1950. OISST is used as the starting point for a lot of climate models, because it has daily data available, and has that higher resolution. The finer detail in the OISST also allows it to pick up on smaller-scale changes like the current cool Nino3.4 index.

"July's tropical atmosphere mostly looked like neutral conditions, too, with nearly average winds across the tropical Pacific region. There have been some hints of more rain than average over Indonesia, and less over the central Pacific, as well as a slightly positive trend in the Southern Oscillation Index and Equatorial Southern Oscillation Index. These might be early hints of a La Nina pattern ... or might just be short-term changes. So we're playing a waiting game right now.

"Like we did with El Nino, we have to see a certain set of conditions before we can declare the onset of La Nina. First, the monthly Nino 3.4 index (basically the central equatorial Pacific region) needs to drop to or below minus 0.5 degree C. It's close, but not there yet. After that, we need to see forecasts that it will stay below that threshold for five overlapping three-month periods ("seasons"). Finally, we need to see the right response from the atmosphere: a strengthened Walker circulation, meaning stronger surface easterly and upper-level westerly winds over the equatorial Pacific Ocean, lower-than-average pressure and more rainfall over Indonesia, less rainfall over the central Pacific, and higher-than-average pressure in the vicinity of the eastern Pacific." 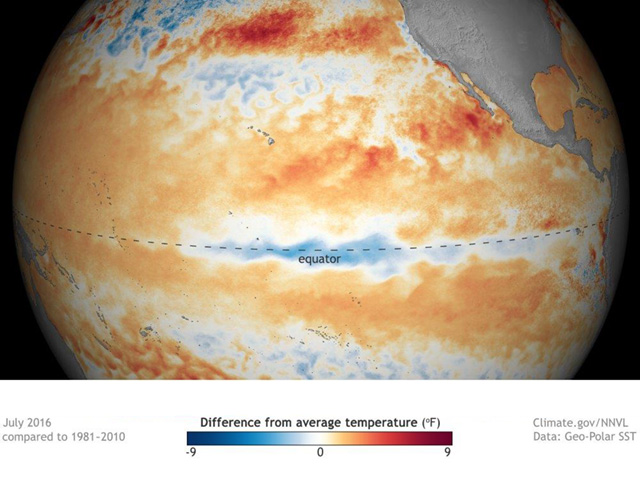