The latest summary of western U.S. water supply by the Natural Resources Conservation Service (NRCS) has almost a happy tone to it regarding snow cover and resulting implications for water supply in spring and summer 2016.--Bryce

We are currently about halfway through the snow accumulation season in the West. A comparison of snowpack conditions now versus those of a year ago reveals some significant contrasts. The areas circled in red are particularly notable.

In the Cascades and Sierra, there was virtually little to no snow in 2015, whereas this year, snowpacks are near to above normal.

Similarly, snowpacks were well below normal in the Southwest (including the circled area of Arizona but also parts of Utah and Colorado to the north) in 2015, whereas now they are above normal.

In Wyoming, we see the opposite contrast. Near to above normal snowpacks in 2015 are well below normal this year.

The current snow water equivalent percent of median map shows similar spatial patterns as last week, but the percentages have all decreased because the past week's precipitation was low. Nevertheless, snowpack remains at or above median over most areas of the West, except in Wyoming, northwestern Montana, and northern Idaho, which are below median.

The NOAA National Water Center's current snow depth map shows a large accumulation of snow in the Mid-Atlantic states and Washington, D.C. There was a significant retreat of snow-covered area since last week throughout the continental U.S., especially in the Great Plains and the Midwest.

The 7-day precipitation percent of average map shows that last week was predominantly dry over the West. The main exceptions to this pattern were wet conditions in northern Washington and central Utah.

The 2016 water year-to-date precipitation percent of average map retains the same general pattern as last week, with most of the West having average or above average precipitation. Wyoming, northern Utah, and a small zone in northwestern Montana remain the only dry areas.

Drought conditions remain essentially the same as last week. Over the past 6-12 months, conditions have improved in much of the country, especially in the south-central U.S. and the Pacific Northwest. The remainder of the West has shown improvement, but long-term drought persists in California.

The modeled soil moisture percentiles as of January 23, 2016 show primarily above average conditions throughout the country. There are only a few scattered areas of dryness, primarily in parts of the West, the northern Great Plains, and in Ohio, Kentucky, and West Virginia.

The full report is at this link: http://goo.gl/… 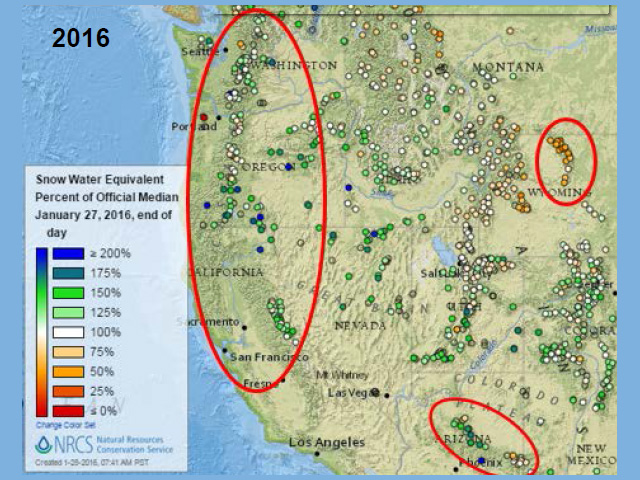