Temperatures across Western Canada have been for the most part following the path we would expect to see during an El Nino event so far this winter. Milder-than-normal weather was noted during December with Manitoba in the well-above normal category. January should follow a similar path with the eastern Prairies a good deal above normal while Alberta tallies readings just a little surplus from what is average.

The weather has not been consistently mild, however, and December was split with warmth to start and chill to finish. January has been mild to start, cold during the middle, and is ending on a mild note. We have even seen some record high temperatures across Manitoba during the past day or so.

As we approach the start of February, we see signs that roller coaster temperature patterns may continue. Pacific Ocean air has taken hold across the Prairies during recent days and sent temperatures up in a big way and we expect the mild weather to last through the weekend.

Changes are looking likely as we start next week, as a blocking upper level high pressure ridge develops along the West Coast of Canada and stops the flow of Pacific air into Western Canada. Developing surface high pressure across northwest Canada will allow for the development of arctic air and some of this colder-than-normal air will push southward into the Prairies by the middle and end of next week.

The main polar vortex will be located across northeastern Canada for most of the next 10 days helping to build the supply of arctic air across central Canada. But as we move toward 10 days from now, the core of the cold air may again retreat to northeastern Canada.

As we have seen before, this winter the colder weather pattern is likely to be only temporary in nature. As time moves to the second week of February, most of the computer model guidance shows the blocking ridge decaying and allow a return of Pacific-origin air once again. This tells us that while it may turn rather cold again during next week, most of us may not have to wait too long before above-normal temperatures return.

Attached is the latest February temperature forecast from the U.S. National Center for Environmental Prediction. Above normal-temperatures are forecast for nearly all of Canada, including the Prairies. Even though it may turn quite cold for a time to start February, it is probable that a much longer period of mild weather will follow and tilt February's average temperature to the plus side of normal.

Precipitation will continue to be less than average for most areas. To date in January, precipitation is running about 1/2 to 3/4 of normal across Saskatchewan and Manitoba, while Alberta has done a little better with amounts varying from a little below to a little above normal.

Given that our large-scale weather patterns are still being governed by El Nino, we would expect most of Western Canada to see less-than-average precipitation totals for February. Snow depths continue to lag behind normal levels for most areas and we do not see this changing much anytime soon.

Doug Webster can be reached at doug.webster@dtn.com 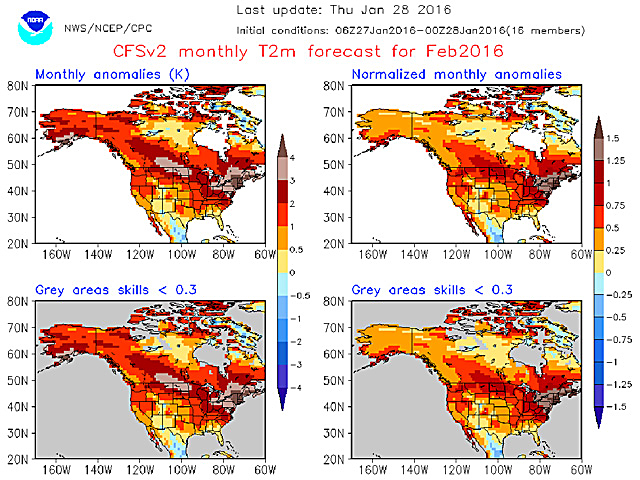