As the Brazil crop season moves into the Southern Hemisphere equivalent of July, rainfall is occurring more often for the northern part of Brazil's soybean belt. That means that Mato Grosso (the top soybean-producing state) and Goias (number-4 in Brazil soybean production) -- are finally soaking in some moisture after a very-dry start to the season back in September. Mato Grosso, especially, had minimal rainfall to begin the 2015-16 crop year. However, things are definitely looking up; rainfall for the month is at least close to normal in this part of Brazil. Farther south, the moisture totals show a generally-consistent trend of above normal. The far south (Rio Grande do Sul) is a bit drier in January, but is still running more than double its average amount for the growing season.

Here's a look at the January and November 1 to date rainfall totals, as compiled by my colleague Joel Burgio. Totals are in inches. 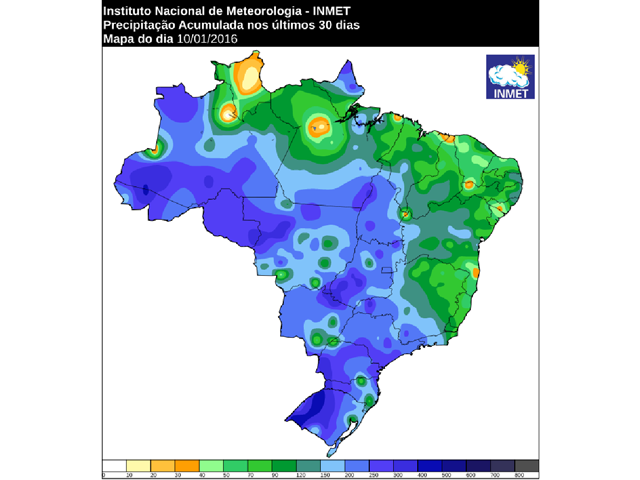 Bryce Anderson
1/14/2016 | 7:58 AM CST
Also, a promotion note for the Market Weather videos that I produce every day--that video features a daily look at Brazil satellite imagery and forecast rainfall, along with reports of what's happened on rain recently. Mato Grosso is highlighted every day. Check those out and they should help in getting acquainted with the geography of the Brazil soybean belt as well.
Bryce Anderson
1/14/2016 | 5:05 AM CST
Here is a reference map. Mato Grosso produces 30 percent of the Brazil soybean crop. http://goo.gl/1hsFGY
andrew mohlman
1/13/2016 | 12:29 PM CST
A map showing crop area would be nice with your rain map.
Bryce Anderson
1/13/2016 | 5:21 AM CST
Things certainly remain drier in northeastern Brazil. That is a typical response to El Nino. However, northeastern Brazil is a minor contributor to the Brazil soybean crop total.
andrew mohlman
1/12/2016 | 12:58 PM CST
I must be getting bogus reports down there that say it hasn't rained in two weeks or more that map don't March your numbers main crop areas look dryer than you stated