UPDATED: Nearly two years in office, the Biden administration now has an undersecretary for Trade and Foreign Agricultural Affairs at USDA and chief agricultural negotiator at the U.S. Trade Representative's Office.

Iowa native Alexis Taylor was confirmed by a voice vote on Wednesday afternoon, drawing praise from industry groups. Taylor was nominated for the post in mid-May, and the Senate Agriculture Committee forwarded her nomination to the full Senate at the end of September.

"Thanks to the confirmation of Alexis Taylor as Under Secretary for Trade and Foreign Agricultural Affairs, @USDA can continue our critical work on a key priority for the Biden-Harris Administration and build on our already record trade numbers under her experienced leadership," Agriculture Secretary Tom Vilsack stated on Twitter.

UPDATED: The Biden administration's nominee for chief agricultural negotiator for the U.S. Trade Representative's Office, Doug McKalip, was also confirmed by the Senate in a voice vote late Thursday afternoon as well. McKalip's nomination had been blocked by Sen. Bob Menendez, D-N.J. The newsletter Inside U.S. Trade reported that Menendez lifted his hold on Wednesday.

After McKalip was confirmed, the American Soybean Association stated, "The U.S. Senate has delivered another Christmas gift to soy growers!" ASA pointed to both confirmations as great news for agriculture.

"These two votes cap off months of advocacy by ASA and other agricultural groups to see McKalip and Taylor confirmed to key agricultural trade positions. Their responsibilities within those roles, and how they work with farmers to help us with trade, markets and more, are essential to our day-to-day jobs out on the farm -- and touch every farm state in the country," said Daryl Cates, ASA president and soybean farmer from Illinois.

Taylor and McKalip come into trade talks while there are questions surrounding U.S. corn exports to Mexico, dairy exports to Canada, as well as a need to boost U.S. grain exports to help fill global gaps caused by Russia's invasion of Ukraine.

Taylor had served as director of the Oregon Department of Agriculture since 2016. Before that, Taylor worked at USDA in the Obama administration in the Farm and Foreign Agricultural Services area. Taylor also had worked on Capitol Hill for members of Congress. As an Army reservist in college, Taylor also served a year in Iraq.

Doug McKalip has nearly 30 years of service at USDA, and was serving as a senior adviser to Agriculture Secretary Tom Vilsack. McKalip worked in policy and regulatory issues at USDA with a focus already on issues such as international security, biotechnology, research and renewable energy, according to his biography. McKalip also served as senior policy adviser for rural affairs at the White House Domestic Policy Council during the Obama administration.

Dan Halstrom, president and CEO of the U.S. Meat Export Federation, on Wednesday thanked the Senate for confirming Taylor, saying she "will be a tremendous asset to USDA and a champion for U.S. agriculture. USMEF had many opportunities to work with Ms. Taylor in her previous roles at USDA and she brings an exceptionally strong background and track record to this key position."

Julie Anna Potts, president and CEO of the North American Meat Institute, noted the meat and poultry industry backed her nomination. "She is the right person at the right time to lead the nation's focus on strengthening exports, expanding access to new markets and navigating an increasingly unpredictable global economy," Potts said. "We look forward to working with her especially as meat and poultry products are seeing record demand at home and abroad."

Ted McKinney, CEO of the National Association of State Directors of Agriculture, was the last undersecretary for Trade at USDA. He also thanked the Senate for her confirmation.

"Alexis' work as Under Secretary of Agriculture for Trade and Foreign Agricultural Affairs is needed now more than ever as increasing trade is an important element to alleviating supply chain challenges and curbing inflation," McKinney said. "We know her efforts are sure to have a meaningful impact on consumers and families nationwide."

"Ms. Taylor has spent her career as a dedicated public servant working for American agriculture. Throughout this process, she has proven that she understands trade and agriculture and will be an invaluable asset to USDA as they help farmers and rural communities recover from the pandemic," said Chairwoman Debbie Stabenow, D-Mich.

Sen. John Boozman, R-Ark., cited Taylor's history of work in agricultural trade and said she will be an asset for farmers and ranchers in her role.

"I am confident she will work to increase export market access for our farmers and ranchers while working to ensure our international partners abide by the spirit of our existing trade agreements," Boozman said. "I am pleased that the Senate moved to confirm her for the Under Secretary for Trade position before Congress adjourned and look forward to working with her as she oversees this important mission at USDA." 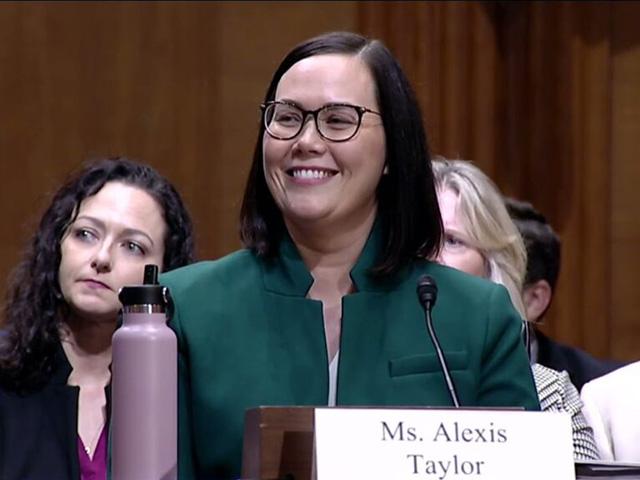