Sen. John Boozman, R-Ark., the ranking member on the committee, told reporters after a confirmation hearing that he also hopes they can be confirmed next week. Stabenow noted to reporters that the committee must first approve the nominations, but she pointed out there is broad bipartisan support for the nominees.

Stabenow made the statement after Sen. Chuck Grassley, R-Iowa, called for unanimous consent next week on Taylor's nomination. Taylor is the director of the Oregon Agriculture Department and previously served on Capitol Hill and at USDA, but she grew up in Iowa. Grassley and Sen. Joni Ernst, R-Iowa, both said they would support her nomination.

Under questioning, Taylor promised to work on difficult issues such as Mexico's plans to ban biotech corn and the development of a mandatory country-of-origin labeling regime for beef, even though Congress repealed a previous plan after the United States lost a labeling case at the World Trade Organization.

Sen. Cindy Hyde-Smith, R-Miss., asked Taylor about India's subsidies on rice, which go against India's obligations under the WTO. Taylor responded that part of her job involving trade policy would be to ensure existing commitments are enforced.

"Should I be confirmed, I'm very interested in looking into this issue, engaging with your rice producers in Mississippi and your office to look into it further." Taylor said.

The Renewable Fuels Association, the National Cattlemen's Beef Association and Farmers for Free Trade urged the Senate to move quickly to confirm Taylor.

In an opening statement, Stabenow noted that the seat on the Farm Credit Administration board has been vacant for several years and that "while I appreciate the continued service of the two current board members, both of their terms have expired, and I urge the White House to quickly nominate people to fill these positions."

"Due to rapidly increasing interest rates, farm interest expenses related to servicing record-high farm debt are expected to increase by $7.5 billion to a record $26 billion, the largest increase of all time and up nearly 40% from last year," Boozman said.

"In addition to increasing interest expenses in 2022, the record-high increase in farm production expenses is expected to persist in 2023, making the costs of borrowing and capitalizing farm production efforts such as the upcoming spring planting season even more expensive."

Boozman said he was also "interested in knowing more about the U.S. Department of Agriculture's recent declaration of salmonella as an adulterant in certain poultry products and hope to get a better understanding of USDA's future plans with regard to salmonella regulation."

Responding to a question, Esteban said he is "passionate" about salmonella and that the USDA announcement signaled that the government is "serious" about it. But he also pledged to work with all parties and added, "how we get there is important."

Logan, who was born in Oklahoma and educated there until he went to Columbia University's School of International Affairs, spent most of his career in corporate law and the securities industry but is now chief financial officer and chief investment officer with the Native American Agriculture Fund, which is based in Little Rock, Ark. Logan repeatedly promised to work with young and beginning farmers. Boozman said he appreciated Logan's Little Rock connection.

The committee received the nominees warmly. Republican senators in particular have criticized the Biden administration for taking so long to nominate candidates, particularly for the trade position, but the committee has also been slow to schedule a hearing on the nominees.

Stacy Dean, the nominee for Agriculture undersecretary for food, nutrition and consumer services, is still waiting for a hearing, but Republicans have said that hearing should not be held until the committee receives a General Accountability Office report on USDA and nutrition.

The Senate Finance Committee has approved Biden's nomination of Doug McKalip to be chief agricultural negotiator in the Office of the U.S. Trade Representative, but the full Senate has not acted on the nomination. 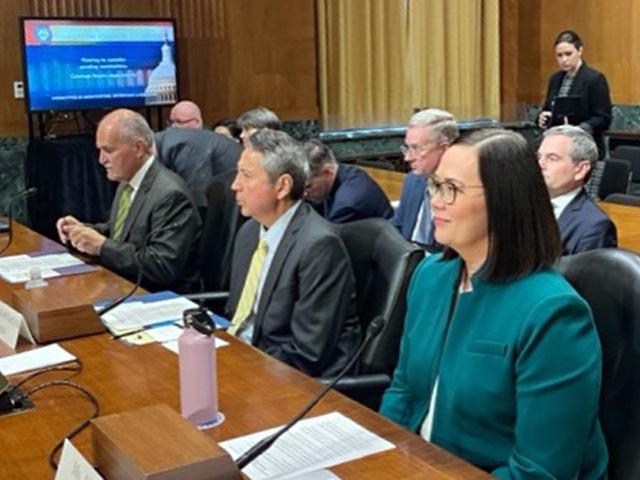