In testimony, Bonnie noted his own background on a Kentucky dairy farm that also raised shorthorn cattle and with family property in South Carolina "that has been managed for wildlife conservation for more than 100 years."

"Production and conservation are the flip side of the same coin," Bonnie said. "Agricultural production is vital to meet the food and fiber needs of a growing world, but that production relies on healthy soils, clean water and a stable climate."

Stabenow added, "I want to underscore that in our conversations, Mr. Bonnie has stated his commitment to tackling the climate crisis and boosting farm income at the same time with voluntary measures."

She also noted that his supporters include the American Farm Bureau Federation, the National Pork Producers Council, the American Soybean Association, and the American Sugar Alliance.

But Stabenow also pointed out that Bonnie, who served as Agriculture undersecretary for natural resources and environment in the Obama administration and is now Agriculture Secretary Tom Vilsack's climate adviser, is being considered for a "broader" position, and asked for his priorities for farm production.

Bonnie replied that "preserving the safety net is incredibly important" and added that "equity" is also. Conservation needs to be made easier for farmers, he added. Under questioning from Stabenow, Bonnie also confirmed his support for crop insurance, saying it is "vital."

Sen. John Boozman, R-Ark., the committee ranking member, said that both Bonnie and Torres Small are "proven public servants with a history of listening to the constituents they serve."

But Boozman said he is concerned that Bonnie has recommended that the Agriculture Department's Risk Management Agency prioritize climate smart agricultural practices.

"I am concerned that the use of crop insurance to achieve policy goals regarding climate change could distort the intended purpose of the program, which is actuarial soundness," Boozman said.

Under questioning from Boozman, Bonnie said he had "extensive conversations" with the USDA general counsel's office about the decision to announce increases in the rental rates for the Conservation Reserve Program and that he believes the Biden administration had strong legal grounds to make the decision.

Boozman said he believes "that is not the case" and added he doesn't want producers to sign up with the legality of the rental rates up in the air.

Bonnie's previous writing that the Agriculture secretary has the authority to use the Commodity Credit Corporation, a line of credit at the Treasury Department to help farmers, for a carbon bank has been controversial, but Boozman did not focus on that issue Thursday. Boozman had earlier told reporters that he believed the administration was moving away from that idea.

Sen. Roger Marshall, R-Kan., quizzed Bonnie about his views on the CCC, however, and later released a videotape of their exchange.

Bonnie told Marshall that he does not believe that carbon is a commodity in the CCC sense, but that the CCC might still be a tool "as a potential way to create partnerships" to help farmers with climate and carbon issues.

Marshall said he is worried about such an idea "running that bank dry," but Bonnie said that any action the administration takes with the CCC would be "put in front of people."

Near the end of the hearing, Sen. Tommy Tuberville, R-Ala., said he looked forward to hosting Bonnie for turkey hunting in his state. Boozman told reporters he thought Bonnie "did a good job today."

Torres-Small faced fewer tough questions, but many senators sought reassurances that she would pay attention to issues in their state, particularly broadband deployment and affordability.

In an opening statement, Stabenow noted that after the Trump administration did not fill the position of Agriculture undersecretary for rural development, she led the effort to reinstate the position in the 2018 farm bill "because 60 million rural Americans deserve representation at USDA's highest levels."

Stabenow also noted that the position is the only one in the federal government that represents small towns.

Torres Small, who served as a House member from New Mexico from 2018 to 2020, "prioritized improvements to high-speed internet and reliable water for her constituents -- making it easier for children to learn and farmers to grow," Stabenow said.

Torres Small noted in an opening statement that her congressional district, New Mexico's Second, "is geographically the fifth largest district in the nation."

"That's a lot of dirt roads. It includes remote areas and diverse populations -- from acequias and land grant communities in Valencia County to ranchers and colonias along the United States-Mexico border and Mescalero Apache in the Sacramento Mountains."

She also noted that she had the opportunity to represent her home because her grandparents immigrated from Mexico to pick cotton in the Mesilla Valley.

"I grew up hearing stories about the opportunities my grandparents seized through hard work and vision -- like when my nana noticed as a teenager that the men were making more money in the fields because they were handed the larger bags for picking cotton. Farmworkers were paid based on what they picked, and she realized she was losing time because she had to go back and forth to the truck more often to haul the smaller bags. So, she built up her strength and mustered her courage to ask for the larger bags."

Torres Small said she "chose to work in water law because I knew the opportunity my grandparents achieved through working the land and the recognition, fostered by my mentor Sen. Tom Udall (D-N.M.) that water is life, and climate change is threatening the heart of rural communities."

A committee vote on the two nominees has not been scheduled. 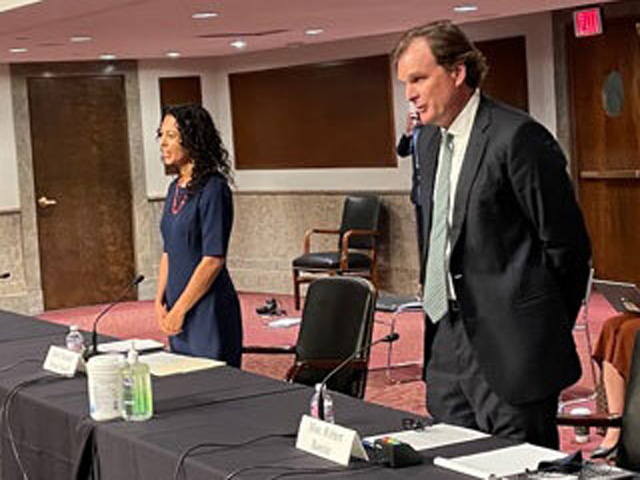