The lead Senate sponsor of President Joe Biden's immigration bill told a business group Thursday that getting a bill through the Senate is a "Herculean task" that will businesses and lobbying groups put pressure on lawmakers to back it.

Sen. Robert Menendez, D-N.J., told members of the American Business Immigration Council on a Zoom discussion that if they want an immigration bill to pass then they need to be committed to spending the political capital needed to pass it.

"We need you to make it clear through your words and your actions, and your dollars, that you will not lend your support to politicians or platforms that stoke fear, spread xenophobia and stymie prospects for reform," Menendez told the group.

The Senate is split 50-50 but Vice President Kamala Harris can also vote on legislation. If every Democratic backed the bill, Menendez said it would take at least nine Republicans in the Senate to back the bill enough to block a filibuster. Menendez was part of the "gang of eight" in the Senate in 2013 that got enough votes to pass comprehensive immigration reform only to see a Republican-led House decline to take up a bill.

The bill Biden introduced would legalize people who were in the U.S. illegally before Jan. 1, if they passed criminal and national-security checks, and pay their taxes. Depending on how long they have been in the country, the legislation would ensure temporary legal status, then legal status and potentially citizenship. Farm workers in the country illegally would gain legal status if they can show they worked at least 100 days in agriculture at least four of the last five years. The bill offers a quicker path to citizenship for farm workers and workers on other certain sectors.

Rebecca Shi, executive director of the American Business Immigration Council, said more than 70% of undocumented workers are involved in "essential sectors" as dubbed by executive actions last year at the beginning of the pandemic.

Highlighting some of the challenges convincing Republicans to back the bill, Sen. Chuck Grassley, R-Iowa, a member of the Senate Judiciary Committee, held a call with reporters on Thursday. When asked by DTN about his view of Biden's immigration bill, Grassley said he thinks the Biden plan "is so extreme, it goes even further that what we didn't get 60 votes for 2013." The idea of a comprehensive bill that would legalize 11 million people would not gain his support. "I think they would have a good chance of getting something done on DACA, even citizenship for DACA people, but legalizing 11 million people without security the borders -- and there's some evidence that they want less security on the border than what Obama had -- that, I don't think is going to go over very well."

Beyond legislation for Deferred Action for Childhood Arrivals (DACA) recipients, Grassley said he thinks something could be done for agriculture as well, but the senator did not spell out specific details.

The bill, at least as proposed, does not address problems with the current H-2A guest-worker program. Agricultural groups want to make it easier to bring in guest workers and allow them to stay in the country longer. Agricultural groups also have tried to curb rules on H-2A wages as well.

Highlighting the demand for farm labor, even with complaints about the H-2A program, it continues to grow. In Fiscal Year 2020, which ended Sept. 30, 2002, agricultural employers received 275,430 guest workers, up about 6.4% from 2019 despite the pandemic. The top states for H-2A workers were Florida, Georgia, Washington, California and North Carolina, which accounted for just over half of all the H-2A jobs. 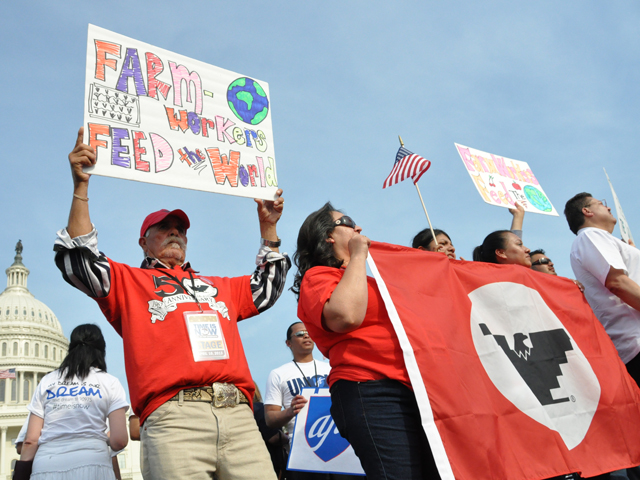