At least some progressives have been up in arms over Tom Vilsack's selection to return as secretary of the U.S. Department of Agriculture.

He didn't do enough the first time around in areas important to progressive causes, ranging from racial equality to climate change and corporate consolidation in agriculture.

Still, at a time when our country is suffering from a lapse of reason, Vilsack brings an understanding that USDA can provide stability as families need food aid and rural America needs a strong economy. President-elect Joe Biden is looking to demonstrate practical results as the country climbs out of the hole in the social fabric partially caused by the pandemic. Vilsack will have to walk into the office ready to implement much of the aid package approved by Congress just before Christmas -- about $13 billion overall. The department will also need to assess the next possible round of aid and economic stimulus for both rural America and food-aid recipients.

USDA is a wide-ranging department that touches most Americans in one way or another, but also a department generally run without the fanfare or attention of other Cabinet positions. Former Sen. Tom Harkin of Iowa once called Agriculture secretary "a thankless job" that satisfies no one. Former President Barack Obama's new book, "A Promised Land," covering his election and first term, mentions Vilsack twice -- once just in passing regarding a former Vilsack staffer who joined Obama's campaign team. Later in the book, Obama pointed out a few Cabinet members demand most of his attention because of their posts. Others did the "yeoman's work without a lot of hand holding," such as, "Tom Vilsack, the hard-charging former governor of Iowa, would leverage Recovery Act dollars to spark a host of new economic development strategies for struggling rural communities."

Having reported on Vilsack for more than two decades, I can attest that single sentence reflects Vilsack's wonkish nature. Biden is bringing in a secretary who already understands how nutrition programs can help lift people out of poverty. Vilsack also knows how to use those same nutrition programs to help improve sales for small to large fruit and vegetable farms by incentivizing lower-income people to spend those dollars at local farmers markets.

Looking at our situation now, people forget how dire the economic situation was in 2009 when the Obama administration began. The number of people on the Supplemental Nutrition Assistance Program -- food stamps -- jumped from 28 million in 2008 to 45 million by 2012.

Some agricultural sectors in 2009 were hit harder than others by the recession. Dairy prices crashed at the beginning of the year. Vilsack was limited in what he could do because the 2008 farm bill eliminated multiple price-support programs for dairy farmers at the time. The secretary became frustrated because there was actually little he could do to help dairy producers. At the time, Agriculture secretaries were more cautious about tapping their special fund -- the Commodity Credit Corp. A GOP Congress would later put tight clamps on Vilsack's ability to use the fund after he gave hundreds of millions in aid to Arkansas farmers right before the 2010 election. After the Trump administration took over, Congress released the restrictions and USDA in 2018 and 2019 spent $23 billion on ad-hoc aid payments to farmers because of trade disputes with China.

Vilsack has a temper and at times that can backfire. He was angry in 2012 and 2013 when Congress couldn't pass a new farm bill. He questioned whether that reflected less influence by rural America in Congress. Delays in getting agriculture and food policy passed had ripple effects for livestock producers waiting for disaster aid at that time. Stalling the farm bill hurt rural development and trade-promotion programs, renewable energy projects and conservation. Vilsack explained all of the various programs that come out of USDA get held up when Congress can't come together.

"If you are an environmentalist, or are concerned about climate, or interested in outdoor recreation, you ought to be angry today that we didn't get the next step in the process, because this food, farms and jobs bill is indeed an environmental bill. It's a climate bill. It's a conservation bill," Vilsack said at the time.

Race has become an issue with Vilsack's nomination, suggesting he would not help address some of the department's racial inequities that have haunted USDA for decades. Here is an area where Vilsack has made mistakes and tried to recover from them. Vilsack fired Georgia Rural Development director Shirley Sherrod after a doctored video on right-wing media made it seem like Sherrod was denying services to white farmers. Vilsack initially failed the extremist attack on Sherrod by firing her without hearing the full airing of facts. Vilsack apologized for the gross overreaction, but it's hung with him. Still, Sherrod said in an interview last month that she supports his return to his old post.

"He didn't do all he should have done the first time around," Sherrod told MSNBC's Joy Reid. "I feel we should give him the opportunity to get it right this time. There should be no excuse, no excuse whatsoever. He doesn't have a learning curve."

John Boyd Jr., the president of the Black Farmers Association, has questioned whether Vilsack would help Black farmers compete. Yet, one of Vilsack's first meetings with USDA staff in 2009 dealt with getting up to speed on civil rights claims against the department. He worked to reach a second settlement in a long-standing discrimination case against USDA known as the Pigford cases. Vilsack and then Attorney General Eric Holder reached at $1.15 billion settlement with Black farmers to settle the cases in 2010. Vilsack also reached a similar, $380 million settlement with Native American farmers and ranchers in 2011.

The Pigford settlement was controversial and Republican lawmakers did everything they could to hold up the funding, delaying the settlement funds with U.S. Senate holds on the bill while House Republicans used press conferences to questioned the number of claims without considering the number of Blacks denied access to USDA programs in the decades leading up to the settlement. Congress finally approved the Pigford settlement near the end of 2010 just before Democrats lost control of the House and Senate. Vilsack said more than once that settling these discrimination cases was critical to "send a strong signal that USDA is turning the corner and turning the page on a very difficult chapter in our history."

Other critics have questioned Vilsack's commitment to addressing climate change, again arguing he didn't do enough the first time around on that issue, either. Agriculture accounts for about 10.5% of all U.S. emissions, according to EPA, split roughly equally between livestock and crops.

Early on, Vilsack championed climate legislation that would boost farmers' roles in reducing greenhouse-gas emissions by sequestering carbon. Climate change became such a taboo topic after 2010 that Congress wanted nothing to do with passing climate legislation so the department set the groundwork for carbon sequestration by advocating for "soil health" in USDA's suite of conservation programs. Coming from Iowa, Vilsack also understood how renewable energy could boost the rural economy, and he used USDA Rural Development programs to the maximum of their abilities to help renewable fuels and power through grants and loans.

USDA under Vilsack committed to reduce emissions in forests and soils by more than 120 million metric tons of carbon dioxide equivalent by 2025. Last year, a new "innovation" agenda released by outgoing Agriculture Secretary Sonny Perdue released targets to cut food waste by 50%; reduce water pollution and nutrient loss by 30%; and increase biofuel use to 30% of the nation's fuel supply. The Perdue plan, however, did not release a specific target for reducing greenhouse-gas emissions.

Once again, major action on climate change at USDA depends on legislation. A bill introduced last year, the Growing Climate Solutions Act, didn't advance in Congress, but now one of the sponsors, Sen. Debbie Stabenow, D-Mich., will chair the Senate Agriculture Committee. The bill would set standards and certification for carbon credit programs.

Just before walking out the door when leaving office in 2017, Vilsack also released a USDA report showing that biofuels could reduce greenhouse gases 50% to 76% compared to gasoline if farmers adopted more precision-agriculture and conservation practices. The report was not meant so much for farmers but to explain to the rest of the world about the impact of farmer practices in the countryside.

"One of my challenges in going around the country talking to people about this industry is they are uncertain about its impact on the environment," Vilsack told me at the time. "This is our take and our sweet spot." 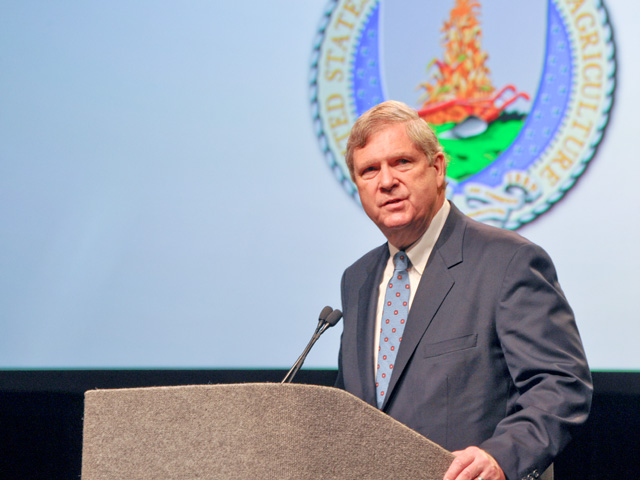