On Friday, both Biden and Trump stumped in parts of Minnesota and Wisconsin. Biden was also in Iowa while Trump went to Michigan.

As DTN reported this week, Trump leads among farmers and rural voters, carrying an 18-point lead over Biden in the DTN/Progressive Farmer Zogby Analytics Election poll. Still, more farmers also believe that U.S. agriculture is worse off (39%) than better off (23%) than it was four years ago. Sixty-seven percent of Democrats said it's is worse off than four years ago. Republicans are more positive about the state of agriculture (40% think that it is better off than four years ago), as are Southerners (29% said it is better). But 17% are undecided.

The two candidates also keep bringing up agricultural issues in the campaign speeches as well.

In Wisconsin, Trump said dairy farmers were "decimated under Obama" but now "are doing very well." Trump then touted the U.S. Mexico Canada Agreement (USMCA), saying "our dairy exports are expected to surge by at least 100%."

"I ended the NAFTA nightmare and replaced it with the USMCA," Trump said. "With the USMCA, our dairy exports to Canada are expected to surge by 100%."

USMCA is projected to boost dairy exports to Canada by about $227 million, according to the International Trade Commission analysis, or about 43.8%. Total dairy imports from Canada also are expected to rise $161.7 million as well, the commission stated.

Biden also spoke in Iowa on Friday at an event at the Iowa State Fairgrounds where people parked in their cars to hear him speak. Biden pointed out "Ethanol margins have tanked and Iowa's manufacturing facilities are idle." Biden also criticized Trump for comments the president made saying the farmers were doing better because of trade aid than when they had to farm.

Trump has repeated said on the campaign trail that he took $28 billion in money for tariffs and gave it to farmers, and repeatedly said farmers are better off now. In Omaha last Tuesday evening, he said. "Some people say our farmers do better now than when they actually had a farm." 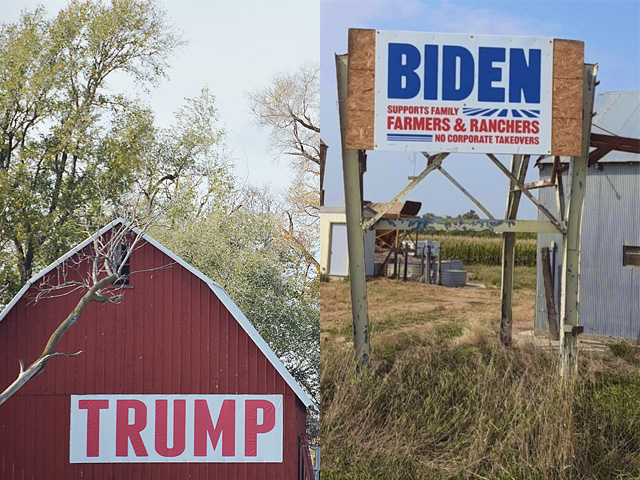