House Agriculture Committee Chairman Collin Peterson, D-Minn., said Thursday that he hasn't seen “anything in writing” that President Donald Trump has told the Environmental Protection Agency to reject the small refinery exemptions to the Renewable Fuel Standard, and that he fears the report about it may be speculation that Trump will try to use until after the election.

Reuters first reported Wednesday that three anonymous sources had told the news organization that Trump had directed EPA to reject the small refinery exemption for past years that oil companies had requested.

But a spokesman for the Renewable Fuels Association told The Hagstrom Report late Thursday that EPA has not confirmed it will reject what are known as “gap year” exemption applications.

During a WCCO radio debate in his re-election campaign for the Seventh District in Minnesota, Peterson said that he hadn't seen “anything in writing.” He said there was “speculation in Washington,” but noted it is based on anonymous sources. It's possible, Peterson said, that the Republicans are using this to “get past the election.”

Peterson noted that he has introduced a bill that would require EPA to be transparent about its decision making surrounding the RFS. Peterson said it was at his urging that Joe Biden, the Democratic presidential candidate, issued a statement that he will support ethanol.

Peterson's opponent, former Lt. Gov. Michelle Fischbach, also a former state senator, said the exemptions would be denied, and noted that the Justice Department did not join a lawsuit from the oil industry to void a 10th Circuit Court of Appeals decision that EPA was wrong to issue some past waivers.

During the 90-minute debate on WCCO, Peterson repeatedly referred to his power as House Agriculture Committee chairman, while Fischbach repeatedly mentioned her support of Trump, and that one of her greatest strengths if elected is that she would be able to be “in Trump's ear.”

Asked about Washington Post reporter Bob Woodward's release of tapes in which Trump said he knew the coronavirus was deadly, but chose not to emphasize that to the public, Fischbach said she has not heard the tapes because she has been busy campaigning and that Trump has been “strong” on the COVID-19 response.

Peterson said that the United States would have been much better off if there had been a national policy of wearing masks and social distancing and avoiding large gatherings, as there was in South Korea and some other countries.

Asked about the 2018 farm bill, Fischbach praised the dairy provisions, but did not acknowledge that Peterson wrote that section of the bill.

Asked about big changes for the next farm bill, Fischbach said she was still listening to the farmers as she travels around the district. Peterson noted that he has already been working on a proposal to give the Agriculture secretary the authority to address the problems that have come up during the coronavirus pandemic so that the Agriculture Department does not have to “scramble” to provide solutions.

Fischbach said her agenda is to “make sure everything is reopened,” make tax cuts permanent, and make sure “the economy is moving.”

Fischbach and Peterson agreed they are opposed to Minnesota Democratic Gov. Tim Walz's proposal that his emergency powers be extended.

Peterson, a longtime friend of the governor, said he believes that decisions on reopening should be determined locally. It makes no sense for businesses in rural Minnesota counties near the North Dakota and South Dakota borders to be closed when those states are open and people from Minnesota travel there to do business, Peterson said.

“We don't have the same density, the same problems we have in the Twin Cities,” Peterson said, referring the rural western Minnesota district he represents.

On China, Fischbach said American farmers had been hurt by Chinese tariffs, but Peterson pointed out that China imposed them in response to tariffs that Trump had imposed on Chinese goods.

Fischbach said she hoped to vote for a conservative for House speaker, rather than House Speaker Nancy Pelosi, D-Calif., but after a moderator pointed out that the Democrats are likely to continue to be the majority in the House, Peterson noted that “on ag stuff [Pelosi] listens to me and that is invaluable to this district.”

Peterson also noted that he does not always vote with Pelosi and the party majority. Under his leadership, he said, the House Agriculture Committee is the most bipartisan in the House.

Peterson noted that he had gotten an A-plus rating from the National Rifle Association, higher than Minnesota Republican Reps. Jim Hagedorn and Pete Stauber. “I don't see myself as a partisan, I see myself as an American,” he said.

Peterson also pointed out how rare it is for a Minnesotan to rise to a committee chairmanship. Southerners, who have traditionally dominated committee chairmanships because they are usually awarded on seniority, have told him that in the past people from the Midwest have not risen in power because “you don't keep anyone in Congress long enough.”

Fischbach and Peterson said they do not have concerns about the integrity of the vote in the Seventh District, where some voters vote by mail. Peterson noted, however, that some constituents are telling him the mail has been late. 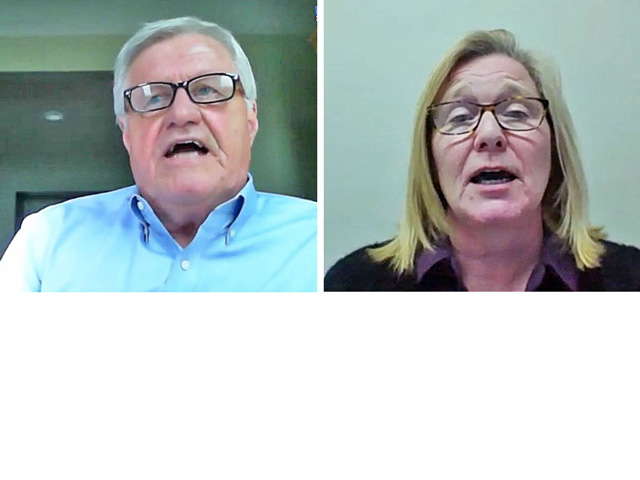