RADCLIFFE, Iowa (DTN) -- Agriculture Secretary Sonny Perdue used the trip to Iowa to declare 18 counties in the state as disaster areas for agriculture, allowing farmers hit by the derecho on Aug. 10 in those counties to access some special USDA programs for conservation and clean-up.

Perdue said there are still some considerations for adding counties depending on assessed losses.

"The rules say there have to be at least a 30% loss in the county and that's what the difference is," Perdue said.

The disaster designation, however, does not include allowing farmers in those areas to use the USDA Wildfire and Hurricane Indemnity Program Plus (WHIP-Plus) to cover financial losses. Perdue reiterated it would require legislation to open up Iowa to WHIP-Plus funds. "We can't originate that under USDA," Perdue said. "That's under the direction of Congress ... Obviously, Louisiana is in a similar situation like that."

Ernst said she would be talking to other senators when they return from break after Labor Day. Congress already is in the midst of partisan battles over what the next coronavirus aid package might involve.

Perdue noted crop insurance remains the biggest safety net for Iowa farmers. He also raised some concerns about how insurance companies are determining losses under the derecho.

Rather than corn fields showing improvement and recovery after the storm, Reynolds said Thursday's flyover instead continued to show devastated corn fields that did not stand back up. "It looks like a lot of corn is rotting from within," Reynolds said.

Reynolds added she talked to Perdue about possibly considering a boost in crop-insurance payments, much like USDA did last year for prevented-planting claims following the flood.

Crop-insurance companies in some cases are declaring a crop a total loss while others are requiring farmers to combine the crop this fall to determine yield losses. Farmers raised that point with Perdue when they spoke to him.

"There is a little bit of a discrepancy about how companies are doing claims here," said Jim Greif, chairman of the Iowa Corn Growers Association. "Some companies are allowing to destroy the crop and others who have total destruction who are being told they have to combine it out."

Greif said the damage in Iowa will play out throughout the 2020-21 marketing year for the corn crop. "The big problem is the facility damage we have. I know a dozen friends of mine who completely lost their grain (bin) set-ups. We can't just haul it to town because the co-ops lost all of their facilities, too."

Major grain termination points such as Cargill in Cedar Rapids, Iowa, lost their storage capacity as well, Greif said. So now companies are processing but going basically "hand-to-mouth" delivery, Greif said. And farmers with fall-delivery contracts such as himself are seeing their delivery contracts pushed back several months as well. "It's going to take years because there's no way they can build that many grain bins," Greif said.

Talking to reporters, Perdue also reiterated USDA will soon provide the rules for a second round of farmer aid under the Coronavirus Food Assistance Program (CFAP), which has paid out about $9.4 billion to farmers for commodity losses documented before April 15. Sign-up for the first round of CFAP is set to expire next week, Perdue said, and USDA will come out with details for the next round. The number of commodities under CFAP 2 will expand to as many as 89 different crops and livestock, though it will not include any aid for ethanol, he said. The secretary said there was not enough money in the Commodity Credit Corp. (CCC) to pay processors such as ethanol producers for losses.

Small refinery exemptions were another topic Greif raised with Perdue. "He made that promise again that we will probably be having something coming soon, but we've heard this before."

EPA right now has more than 100 applications for small-refinery exemptions waiting for a decision and refiners have now back-dated their requests to try to maneuver around a federal court decision. Greif added he and other corn growers hope to hear something from EPA before the election on the refinery exemptions. "I think they realize in Iowa we need better lip service than what we are getting," Greif said.

The secretary said his understanding is that any biofuel volume waivers granted to small refiners going forward will still have to be picked up by other refiners to meet the 15-billion-gallon level. "That's what the law calls for, that's what the president committed and that's what we expect," Perdue said.

Talking about farm income, Perdue defended $37.2 billion in government aid to farmers for 2020, pointing to both the lingering effects of trade disputes with China and the response to COVID-19. The secretary also mentioned trade with China, pointing to higher exports that have been happening in recent months as an indication China is serious about buying more from the U.S. Perdue said China is putting forward an effort to reach the $36 billion promised under the phase-one deal.

Despite being overshadowed by disasters and COVID-19, Perdue and Iowa officials visited Chestnut Farms near Radcliffe mainly to spotlight a 15.5-acre wetland project being installed by the Stolee family to reduce nutrient loads in a nearby creek from a 1,900-acre watershed that drains into the creek. Leaders from Pheasants Forever and Ducks Unlimited also participated in the event. Iowa has 41 similar wetland-dam projects under construction on farms across the state to reduce nutrient loads in waterways and build wildlife habitat.

"As a guy that's conservation-minded with wildlife -- I've always been a hunter -- I am always looking at things in the farm bill and what I can do," said Heath Stolee, who farms the ground. "To us, we get to help everyone upstream to help the nitrates, and that helps everyone downstream, but for us we also get to still enjoy it and get all of the benefits of the conservation practices on the ground." 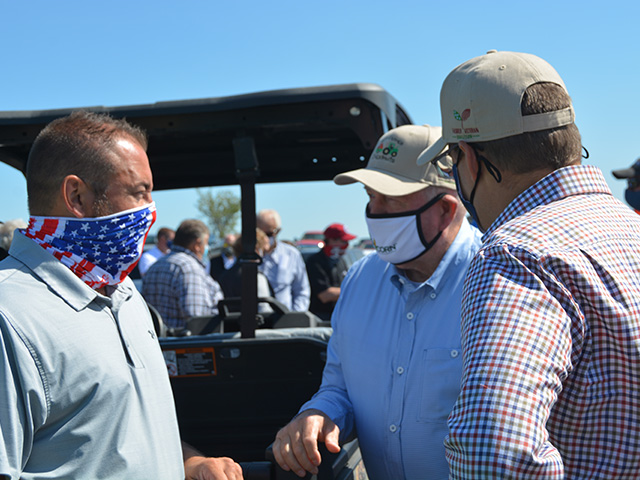