Ernst praised Trump for providing aid following the recent derecho in Iowa, for rewriting the Waters of the United States rule and for implementing the sale of E-15 fuel. She did not mention the ethanol issues of small refinery exemptions to the Renewable Fuel Standard or the delay in the issuance of volumetric requirements under the RFS. The Renewable Fuels Association today asked the Environmental Protection Agency to speed up its decisions on both issues.

Noem stuck to issues of “equality, freedom, and opportunity” and did not mention the coronavirus pandemic, which has led to a large number of cases of COVID-19 among meat plant workers in South Dakota and among maskless travelers who attended the Sturgis Motorcycle Rally, which Noem promoted. CBS reported Wednesday that more than 100 cases of COVID-19 in eight states have been traced to attendance at the rally.

A lobster fisherman and a Wisconsin dairy farmer praised President Donald Trump in speeches at the Republican convention on Tuesday evening.

Jason Joyce, who described himself as an eighth-generation lobster fisherman from Swan's Island, Maine, said, “I have to confess: I didn't support Trump in 2016. Skeptical that he shared my conservative views, I expected him to flip-flop on his campaign promises.

“But he has followed through on his promises, including last week when he brokered a deal to end EU tariffs of 8% on Maine live lobsters and up to 20% on Maine lobster products, which is great news for Maine's lobstermen.”

Joyce also said that, while Maine's lobstermen don't fish in the ocean area that the Obama administration declared off limits to commercial fishermen, the executive order under the Antiquities Act “offended us greatly” and “circumvented the fisheries' counsels' input.”

Trump, he said, “reversed that decision, reinstating the rules that allow stakeholder input, and he supports a process that seeks and respects fishermen's views.

“As long as Trump is president, fishing families like mine will have a voice. But if Biden wins, he'll be controlled by the environmental extremists who want to circumvent longstanding rules and impose radical changes that hurt our coastal communities.”

Cris Peterson, a dairy farmer from Grantsburg, Wis., praised Trump's trade policy and said her farm and others have seen conditions improve after a period of sustained low milk prices that drove hundreds out of business, Wisconsin Public Radio reported.

“As a businessman, President Trump understands that farming is a complicated, capital-intensive and risky business,” she said. “More than any president in my lifetime, he has acknowledged the importance of farmers and agriculture.”

The speeches by the lobsterman and the dairy farmer were part of an evening designed to show that Trump “has made expanding opportunity a cornerstone of his agenda,” and that the economic plan of Democratic candidate Joe Biden would be burdensome, National Journal reported. 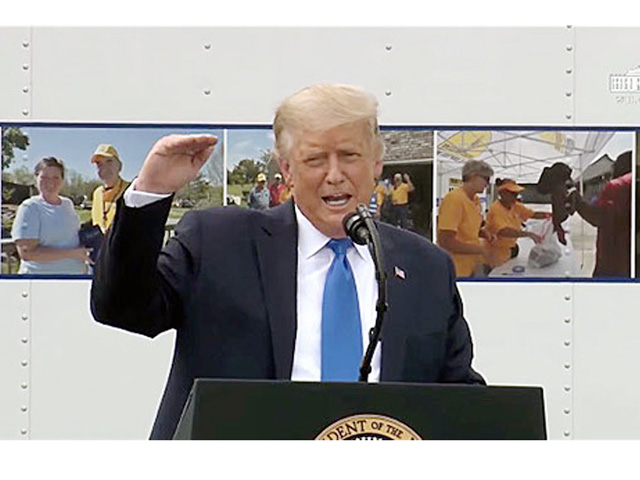