Looking to catch the attention of those around President Donald Trump, the Renewable Fuels Association wanted to make it clear as the president visits Mankato, Minn., on Monday afternoon that was officially in "ethanol country."

RFA bought a full-page ad in the Mankato Free Press and also took to social media welcoming President Trump but making it clear that the renewable fuels industry needs his support. The newspaper ad states, "Ethanol helps keep prices down at the pump and reduces America's dependence on foreign oil.

"But, Mr. President, your Environmental Protection Agency is hurting renewable fuels by handing out waivers to big oil companies that exempt them from the requirements of the Renewable Fuels Standard."

The ad asks Trump to tell EPA to stop handing out the waivers and uphold the RFS.

RFA also pointed out there are 50 ethanol plants within a 150-mile radius of Mankato. That 150 mile radius, which would cut into northern Iowa and a silver of South Dakota, accounts for 28% of the country's ethanol capacity and 1.7 billion bushels of corn demand.

Politico reported on Monday that EPA now intends to stall any decisions on the Renewable Fuels Standard until after the election "for fear of triggering a backlash among farmers or the oil sector."

EPA right now is late on its proposed rule for 2021 volume requirements under the RFS. Typically that rule is proposed in early summer and finalized in November. EPA has not said when the 2021 volume proposal will be submitted for public comment.

RFA did not mention potential aid for ethanol producers in Congress also is tied up as House and Senate leaders are stalled in talks. A House bill passed in May had specific language to help the ethanol industry, but the Senate has not specified any direct aid going to ethanol producers. 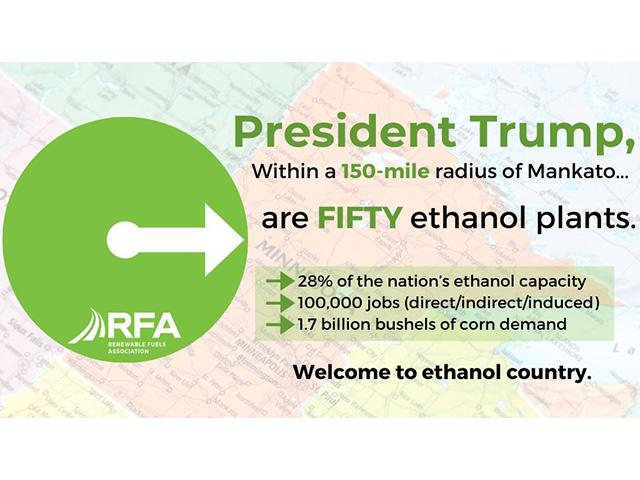