Barring some changes to the Federal Crop Insurance Program, farmers in the latter part of the century will face higher premium and taxpayers will likely pay higher subsidies to cover the program costs.

Under a hotter climate scenario, the total cost of crop insurance to cover the soybean crop could double while the costs of the insurance program for protecting the corn crop could go up 21%, USDA's Economic Research Service stated.

ERS released an analysis Monday of crop insurance costs under some possible climate scenarios projecting out 2060 to 2099. Key crops such as corn and soybeans will be subject to greater risk of yield loss and acreage shifts across the country, leading to overall lower supplies of both crops. Overall crop insurance costs could increase from 3.5% to as much as 22% higher.

The study comes out as USDA drew criticism last week at a U.S. Senate Agriculture Committee hearing for holding back a separate report on climate change. ERS also is being split up as most economists at the agency have rejected demands they leave Washington, D.C., and move this summer to a new office in the Kansas City, Mo., area.

The report highlighted two possible climate scenarios due to greenhouse gas concentration under the Intergovernmental Panel on Climate Change. The scenarios are dubbed Representative Concentration Pathway (RCP) 4.5 and 8.5. Under RCP 4.5, greenhouse emission peak around 2040 then start to decline, which would moderate temperature increases. Under RCP 8.5, emissions keep rising throughout the century, and temperatures continue to rise as a result.

Under RCP 8.5, yield declines for corn, soybeans and wheat are generally larger, except for possibly winter wheat, which is not exposed to summer heat. As expected, yield losses are more dramatic for dryland production compared to irrigated production as well.

Yield riskiness also increases, especially for dryland corn and soybeans, under either RCP 4.5 or 8.5 scenarios.

For corn, soybeans and wheat, the model also projects continued movement out of dryland and into irrigated production to mitigate losses, especially for corn in soybeans, where dryland yield declines could be reduced or even reversed and pushed back to higher yields under irrigation, ERS stated. The model shows a significant increase in irrigated acres in Nebraska, Iowa, Missouri and South Dakota areas all around the Missouri River watershed.

Commodity prices rise with lower acreage and production. Under RCP 8.5, ERS projects average corn prices would increase by about 25% over baseline while soybean prices would rise by more than 50%. "Because average prices are driven by average production, the most pessimistic climate models in terms of yield show the largest increases in price."

The higher prices also imply larger liabilities to be covered, which is a major driver for cost increases for revenue protection insurance policies.

With risk increases for both yield and price risk, premiums increase as well, with premiums changing "most substantially for soybeans," in most areas of the country, ERS stated. Government exposure could shift as soybean production moves to other parts of the country as well.

Corn will also be affected by substantial increase in yield risk and the increase in corn prices. ERS highlights Kansas and Nebraska as places that could see higher premiums due to lower acreage because of related yield declines. Yet, because of lower numbers of insured acres in those states, the government's exposure and costs could decline.

Changes will be less significant when it comes to premiums for winter wheat, in which the price changes would be smaller and more localized.

Insurance premiums paid and government subsidies for premium overall could decline in some parts of the country, partly because production for that crop has shifted out of the area.

Surprisingly, costs of insurance program for wheat only shifts less than 1% under either scenario.

The study notes that the work doesn't include some unmodeled risks, notably what changes in weather conditions will translate into when it comes to pests and diseases. Climate change would increase exposure to both pathogens and pests, the report stated.

Other considerations not factors would include ethanol demand and irrigation (water availability), as well as possible changes in the program design of crop insurance through the farm bill. Lawmakers have already made changes to crop insurance due to climate challenges, such as provisions that allow producers to drop a disaster year from the Actual Production History though yield exclusion.

A full copy of the report can be found at https://www.ers.usda.gov/… 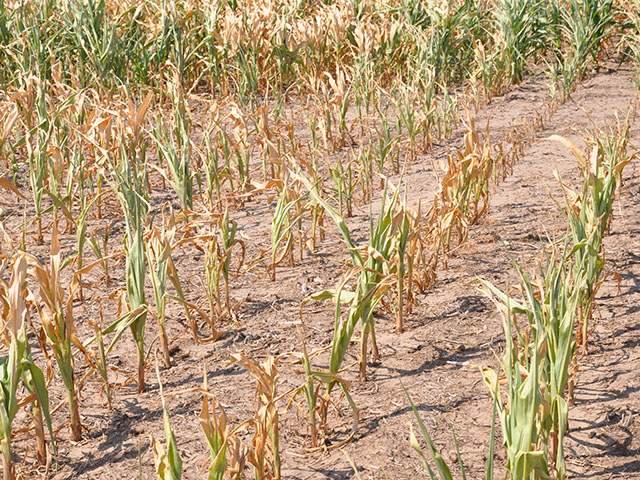