Agriculture Secretary Sonny Perdue told employees of the Economic Research Service and the National Institute of Food and Agriculture today that if they want to stay with their agencies, they must make a decision shortly about whether to take the assignment in the Kansas City region and report to duty by September 30.

Unionized employees at ERS and NIFA turned their backs on Perdue. After Perdue finished, the employees sat down, but as Agriculture Deputy Undersecretary for Research, Education and Economics Scott Hutchins, who oversees the two subagencies, began explaining the process, many of them stood again with their backs to him.

Several employees told reporters that they had learned that USDA had chosen Kansas City and that Perdue would speak at 3 p.m. through tweets and media coverage.

Perdue told the employees that USDA would hold meetings about relocation next week and that the week of June 24 Kansas City officials will come to Washington to provide details about moving to their community.

Employees who choose to move will have to make the decision without knowing whether they will be working in Kansas or Missouri. On a call to reporters, Perdue said that the choice of a building to house the two agencies will be up to the General Services Administration.

In the short term, employees will work in a facility called the Beacon Building, a USDA facility located at 6501 Beacon Dr. in Kansas City, Mo. That facility has space for about 200 people, but it cannot be the permanent location because the lease on it is ending within the next two years, Perdue said.

Perdue declined to answer questions from a Kansas City reporter about what incentives local governments had offered USDA to choose the area for the facility, saying that he considers that “propriety” information, and that it would be up to the local governments to offer details.

He also said that when he was governor of Georgia, incentive packages for relocation were always controversial.

Perdue noted that his own move from Georgia to Washington made him realize that moves are not always easy, and said one advantage federal employees have in Washington is that they can look for jobs in other federal agencies if they want or need to stay in the Washington area.

Perdue also told the employees that they would receive information by the end of the day on their relocation job assignments, the date by which they must choose whether to take the jobs and when they must report to Kansas City.

The employees said that they had not received these relocation notes before the meeting. Hutchins said that a USDA employee named Michelle Esch will be in charge of the move to Kansas City, and noted that the Kansas City Area Development Council has set up a website with local information to help the employees who will move.

Agriculture Deputy Secretary Steve Censky sat on the stage during the meeting but did not speak.

Neither Hutchins nor Perdue took questions from the audience.

Laura Dotson, an ERS economist and union steward, said she would not make the move, but is staying with the agency as long as possible because she considers her work on the Agricultural Resource Methodology Survey to be important.

Perdue’s view that the research can be carried out in Kansas City “is shortsighted,” Dotson said, because ERS employees need to be near their colleagues in other federal agencies. Of the 180 employees left at ERS, Dotson said, she knew of only four who are willing to move.

The protest was organized by the American Federation of Government Employees, the union that employees in both agencies recently voted to join.

In an action alert to its members today, AFGE said: “We believe that it is important to convey forcefully, yet respectfully, that the staff of ERS and NIFA are near-unanimously opposed to his relocation plans.”

“In order to send a message to the secretary and the general public, we (as union members) are calling for everyone to please stand, silently, and turn your back on him as soon as the secretary begins to speak.

his remarks. Please spread the word, please attend. Unity is our strength. This won’t be effective unless we all do it,” the union message said.

In news release today, AFGE said moving the employees is “an attempt to undermine their scientific work.”

“The researchers and other stakeholders we work with don’t want us to move — they want us to stay right here in Washington, where we can easily coordinate with the other federal science agencies,” said AFGE Local 3403 President Dave Verardo, whose local represents the ERS and NIFA employees.

“Secretary Perdue has stated that his rush to finalize the relocation is an attempt to limit the anxiety and burden on employees. In reality, his announcement today does the opposite by accelerating the loss of mission-critical staff who cannot or will not move to a new location,” Verardo said.

“Despite assurances that this relocation is not an attempt to shrink the workforce, we are losing staff and unable to replace them due to this induced uncertainty.”

“Secretary Perdue continually speaks of transparency and communicating to employees but has failed on both fronts,” said Kevin Hunt, Local 3403 vice president for ERS.

“The announcement today highlights his disregard for the rights and well-being of employees. Instead of soliciting input from stakeholders or negotiating with bargaining unit employees,” Hunt said.

“Secretary Perdue went behind closed doors to solicit ‘best offers’ and ‘incentives’ from the short-list sites. The announcement today is a clear indication that Secretary Perdue does not have the best interests of federal employees or taxpayers in mind.” 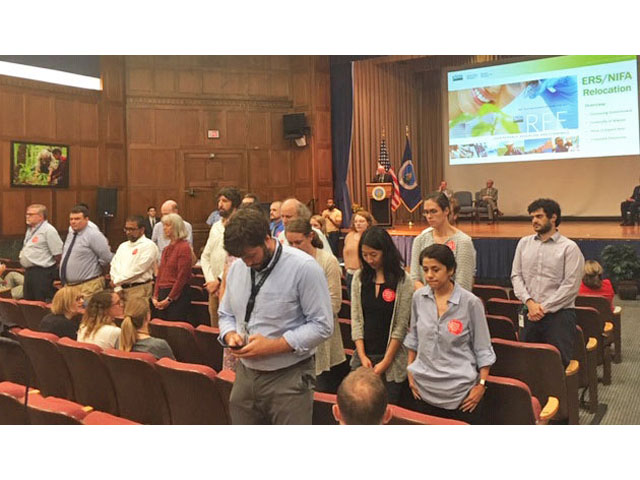