House Agriculture Committee Chairman Michael Conaway, R-Texas, finds himself boxed in a corner, partly of his own choosing and partly due to desires of his soon-to-be-in-the-minority leadership that was determined to pass a farm bill last spring on a partisan vote.

Those House leaders apparently didn't have the foresight to ponder just what could happen if the farm bill wasn't done before the election, and they lost the majority. Now they are stuck with a farm bill that passed 213-211 (50.2%) while staring at a Senate bill that passed that chamber 86-11 (88.6).

Conaway and House aggies still have time to stick with the fundamentals of the farm bill goals sought by the vast majority of commodity and general agricultural groups during the hearing process and run up to 2018. They can work with the Senate, recognize the Senate has the numbers, and protect crop insurance.

Protecting crop insurance was the mantra from 2015 until the time the House and Senate brought their different versions of the farm bill to the floor. Agricultural groups didn't say what they really wanted in a farm bill was a brawl over work and job-training requirements for people on Supplemental Nutrition Assistance Program aid. Ag groups wanted to protect crop insurance.

Few farmers had given any consideration to the idea of dropping land from base acres that hadn't been planted into a crop over the past decade. There weren't any hearings on that topic, or the notion of shifting those base-acre payments to largely support one commodity in Texas. Ag groups talked, repeatedly, about protecting crop insurance.

I was reminded of this at a dinner with some agricultural lobbyists Monday evening. Crop insurance was viewed almost as a sacred cow leading up to this farm bill. When GOP leadership and the Obama Administration cut a deal in 2015 to cut $300 million a year out of payments to crop insurers, Chairman Conaway nearly ran out of a hearing to get to a meeting to stave off those cuts. They were reversed in a matter of a couple of months because of the influence of the insurance industry and farmers. The focus was always on crop insurance, not standing firm on a plan to cut people off SNAP.

House Republicans risk seeing cuts to crop insurance if the farm bill carries over to next year if they remain determined to stand tall during the lame-duck session on their push to tighten job requirements and eliminate income waivers for SNAP. Nobody quite knows the dynamics or the makeup of the House Agriculture Committee in 2019, but given the number of suburban Democratic women elected, it's likely they going to be far more protective of food aid programs than a crop-insurance program they likely do not understand. It's also likely the Trump Administration will again propose crop-insurance cuts in its next budget proposal for FY 2020 early next year.

Cutting into crop insurance, the main safety net for producers, is the risk to the farm bill if Congress can't come to terms between now and the time lawmakers adjourn for 2018. 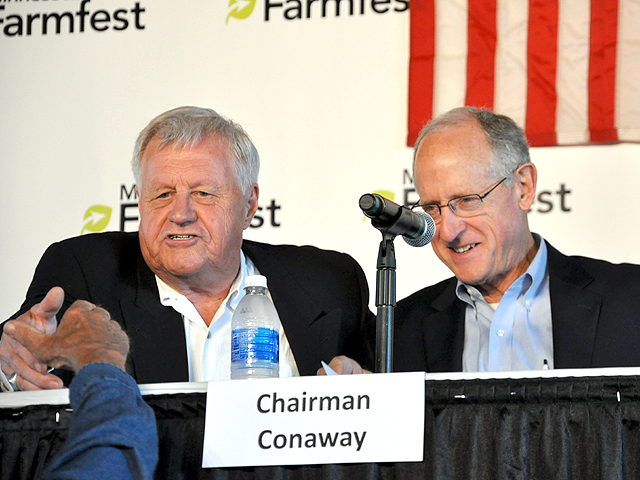 CHRIS CLAYTON
11/14/2018 | 4:50 PM CST
My point was that these are going to be freshmen and it takes a lot of time to learn the nuances of a program like crop insurance. And they will be freshmen mostly not from rural areas, but from the suburbs. Crop insurance isn't going to a big priority for many of these new freshmen Democrats. Collin Peterson made that point last week as one reason why he didn't to carry the farm bill over to 2019.
DThompson2071601819
11/14/2018 | 7:10 AM CST
Chris, Really? Suburban women can't understand crop insurance. Seriously? It's the 21st Century my friend. Enough of that.!