Agriculture Secretary Sonny Perdue said Thursday he favors removing the Section 232 tariffs on Canadian and Mexican steel and aluminum which has led those countries to impose tariffs on U.S. farm products.

“I would be an advocate for relaxing those,” Perdue said in a speech to a joint meeting of the North American Meat Institute, the Canadian Meat Council and Come Carne, a Mexican group.

The issue was discussed in a White House meeting with Trade Representative Robert Lighthizer this week, Perdue said, but no conclusion was reached.

The steel and aluminum tariffs that prompted retaliation are dubbed "232" tariffs after a section in a trade law allowing the U.S. to invoke tariffs related to national security concerns. The tariffs were implemented by the Commerce Department.

He noted that President Donald Trump had imposed the tariffs because he was “concerned about the vitality of U.S. steel industry.” But Perdue said “in my view,” Canadian and Mexican steel had gotten caught up in global overproduction.

Trump imposed the tariffs on Canadian and Mexican steel and aluminum on national security grounds, but critics have questioned how that can be justified since the two countries are neighbors and allies.

On Wednesday a group of U.S. dairy executives said that the new agreement won’t matter as long as Mexico has a 25% tariff on U.S. dairy products.

Perdue said that agriculture has “done a good job overall” in trying to educate the Trump administration about the impact of the tariffs, but it is an issue of increasing the president’s ‘awareness” of the problem.

On China, Perdue said U.S. producers probably made a mistake in becoming too dependent on the big Chinese market, and did not make any allowance for the fact that problems could develop in U.S.-Chinese relations.

The Trump administration has also imposed two sets of tariffs on China, and China has placed retaliatory tariffs on U.S. farm products. Vice President Michael Pence said today that the United States will get tougher with China.

The Trump administration is pursuing trade agreements with other countries with the goal of “little wins that we want to accumulate rather than look for the big wins,” Perdue said.

He said Trump’s negotiating style is working, and that the threat of auto tariffs has led Japan to ask the United States for a free-trade agreement.

In a wide-ranging speech and a meeting with reporters afterwards, Perdue said:

USDA will do everything “we are legally permitted to do” to maintain 39 programs that lost authorization when the 2014 farm bill expired Sunday.

USDA is determined to keep African swine flu out of the country, but has a backup plan if a case is found.

NAMI should submit “good, science-based nominees” for appointment to the panel that will make recommendations for the 2025 Dietary Guidelines. 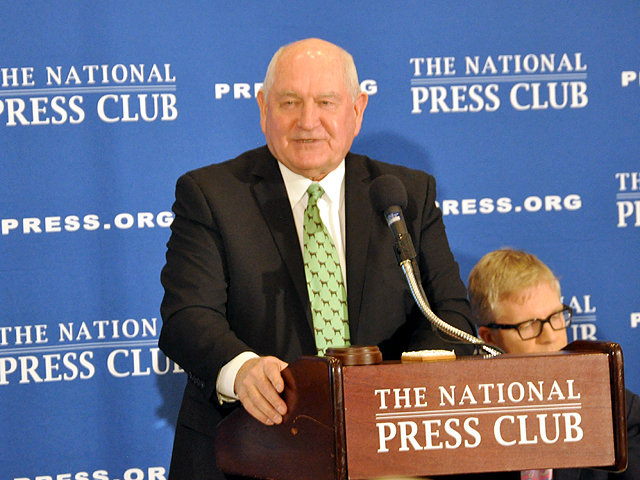