Despite some of the serious needs in rural America, the debate on the House Agriculture Committee farm bill Wednesday will have no amendments on the direction of major programs and funding for agriculture or rural America.

A list of amendments to the House farm bill shows no amendmentsfrom Democrats and just a few from Republicans. Apparently, rather than putting up a battle in committee over changes to nutrition programs, Democrats will basically back off and hold their fight until they get on the House floor.

None of the GOP amendments filed as of Tuesday have anything to do with the commodity title. One involved crop insurance for cotton -- the STAX program.

To summarize what was passed along to me Tuesday on the 20 total amendments to a five-year bill concentrating on agriculture and rural America, "The farm bill comes up only every five years and it runs 600 plus pages and you are telling me that that everything in the bill is so great that we only need 20 amendments and 10 of those don't even directly relate to food or farming?"

But if you are concerned about importing dogs and cats for food, we've got an amendment on that. It's actually kind of surprising because you would think after all this time the federal government should have already addressed the question of whether dogs and cats will be imported for food. Call me crazy, but I want to hear the rationale for the dogs and cats debate. Along with that, a related amendment wants to make sure a report is done on the importation of dogs. This, I grant, could be pretty earth-shattering if we happen to learn the largest U.S. dog importer also owns a restaurant chain.

One amendment wants to assure that criminal prisoners are not counted in the federal government's definition of "rural." Another amendment wants to ensure that USDA's trade programs "support global acceptance of U.S. crops and predictable, science-based regulations" as if this already hasn't been the core of USDA's trade focus going back 20-plus years.

There is an amendment assuring broadband requires minimum download and upload speeds, which could seem logical given all of the focus right now on broadband funds. Nobody wants "broadband" in a 4-mb speed these days.

At the end of the day, debate on the farm bill Wednesday in the House Agriculture Committee will be a partisan theater, seemingly brief in discussion, because Democrats are going to sit on their hands and Republicans are comfortable with the overall direction of the bill. It is symbolic, though, that partisan rancor is finally breaking up the band in one of the few House committees that used to maintain it was a bastion of bi-partisan work.

Previous Post (Are Farmers Thinking About the Farm Bill? )
Next Post (Conaway's Challenge is to Find a Majority for Farm Bill Vote ) 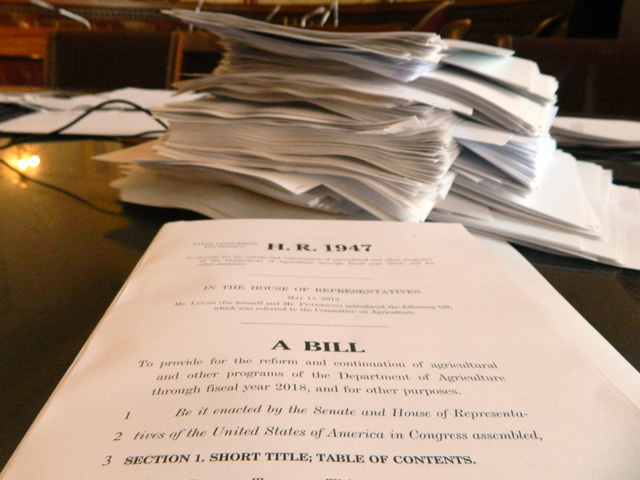 SD Farmer
4/18/2018 | 3:10 PM CDT
Nobody should be satisfied with passing the same failed policy it looks like the farm groups must go to these legislative offices to polish the legislators shoes. How about draining the swamp? The NRCS is doing nothing to help us improve drainage on our farms, they are actually trying to drown us! We need swampbuster reform, get these activists and outside interests out of the NRCS and USDA! If the Republicans continue to allow this abuse of power they are no friend of the farmers as well as the Democrats. The only thing they can come together on is failed policy, the election of President Trump should have sent a message to these non reformists, they have all become way too comfortable and the farmers are suffering from these government thugs!