It's been a busy week for farm bill ideas and agricultural legislation as various organizations are pushing for changes in crop insurance, conservation or the agricultural regulatory environment.

Let's see if we can hit some of the highlights.

The Land Stewardship Project in Minnesota rolled out a report calling for changes in the crop insurance program. Yes, they touched that third rail, despite the insistence from many in agriculture that lawmakers should do no harm to the insurance program. The Land Stewardship Project (LSP) says the two big problems with insurance are the lack of a premium subsidy limit and the absence of meaningful risk management for conservation practices on the farm.

The group's study cites a 2017 USDA report that the amount of crop-insurance benefits is increasingly going to larger farms. In 2015, farms with gross income of $1 million or more received 33% of crop-insurance payouts, up from 12% in 1997. With that in mind, LSP wants Congress to limit the premium subsidy to $50,000 a year.

Along with that, LSP want lawmakers to create pilot projects in the farm bill that test the ability of insurance policies that reward farmers with more diverse rotations and conservation practices on their land to protect water and improve soil health.

To get their point across LSP held a rally Monday at NAU Country Insurance, which is based in Minnesota. Farmers and SNAP recipients both spoke about the farm bill and need for reforms. Tom Nuessmeier, Le Sueur, Minn., was among those attending.

"We wanted to elevate the conversation as we approach the farm bill that we need to take a look and make some practical reforms to the crop-insurance program," Nuessmeier said.

Nuessmeier notes crop-insurance companies have worked aggressively in Washington, D.C., to resist any changes to the program.

"When we travel to D.C., with our members who are relaying in their own words the agenda we're trying to advance, we get the same response, basically," Nuessmeier said. "That doesn't mean it's not right, but we also believe a significant segment of farmers, like myself, who use crop insurance, when we talk about these sort of things they nod their heads and say, 'Yeah, that makes sense.' "

Insurance distorts the land market, Nuessmeier said, because beginning farmers have a hard time finding land and can't compete when acreage comes up. "If you have a system like this with unlimited premium subsidies, that does have an impact and it does allow the most aggressive operations to have an advantage when that land comes up for rent or for sale," Nuessmeier said.

What LSP isn't much different than proposed by lawmakers in the past. Nuessmeier said most farmers, when explained where the cap would be, agree with the approach.

"What we have been proposing is a $50,000 limit on premium subsidy support," Nuessmeier said. "When you talk to farmers and crop-insurance agents around here, that's in the neighborhood of 3,000 acres. So that's not small potatoes, either. Again, when I talk to other farmers, they say that makes sense."

The National Crop Insurance Services put out an email on Thursday seeking to deflect some criticisms of insurance, including how means testing and other efforts would hurt the program. "Capping crop insurance benefits for some translates to fewer policies sold and a higher concentration of risk. Likewise, the elimination of revenue-based tools, the product most utilized by producers, would undoubtedly lead to a decline in program participation – especially among lower risk farmers, crops and regions," the group said. https://goo.gl/…

The National Sustainable Agriculture Coalition praised the introduction of the "Give our Resources the Opportunity to Work (GROW) Act" -- D.C. loves its acronyms. The bill was introduced by a bi-partisan groups of four senators to grow the various conservation programs in the farm bill.

The bill reflects that at least some lawmakers aren't going to go along with significant cuts to conservation in the farm bill without a fight. Sens. Joni Ernst, R-Iowa, Sherrod Brown, D-Ohio, Charles Grassley, R-Iowa, and Bob Casey, D-Pa., -- all members of the Senate Agriculture Committee -- introduced the bill. At a minimum, the bill would maintain the current acreage and funding levels for the Conservation Stewardship Program (CSP), Environmental Quality Incentives Program (EQIP) and the Conservation Reserve Program (CRP). It also would double the acreage in the CRP Grasslands Initiative.

“Nothing in agriculture is more fundamental than healthy, productive soils,” said Alyssa Charney, senior policy specials for NSAC. “Going from ‘dirt’ to healthy soil, however, is far from easy – developing a conservation plan and implementing appropriate, targeted conservation activities can be both challenging and costly for farmers. The GROW Act will provide the assistance and incentives that farmers need to protect the natural resources on and around their operations, support the productivity of working lands, and protect the most sensitive acres.”

The bill also runs counter to President Donald Trump's budget request, which calls for ending the annual enrollment in CSP, cutting about $1.5 billion annually from the program. https://goo.gl/…

Again highlighting that while Congress may be incompetent in many areas, they sure can create some marvelous acronyms. You may remember ACRE as a commodity program in the 2008 farm bill, but the acronym has been given as the Agriculture Creates Real Employment (ACRE) Act.

Yet, the House has its own version of ACRE as well, the Agricultural Certainty for Reporting Emissions Act. 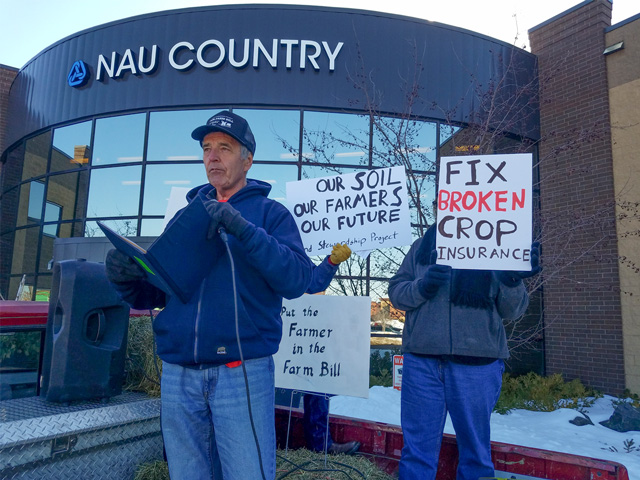 SD Farmer
3/16/2018 | 12:01 PM CDT
Also, conservation should be promoting drainage, it is the foundation to soil health. Saturated soils kills many of the beneficial micro-organisms and bacteria. That's REAL SCIENCE! WAKE UP!