KANSAS CITY, Mo. — National Farmers Union President Roger Johnson said that Congress needs to pass a farm bill to address the 52% decrease in farm income since the last farm bill was passed, but that he can make no promises about whether it will get done before the current law expires on September 30.

“A farm bill needs to happen and needs to happen this year,” Johnson told the group at its national convention here. But he added that, while he believes it will eventually pass, he is “less optimistic about whether the farm bill gets done on time.”

Johnson showed a video that Farmers Union is using to try to inform non-farmers about the importance of the legislation to the entire country and said Farmers Union has “kicked off” a campaign to urge its passage.

“The campaign really needs to explode after convention,” he told the members, adding that Farmers Union will help them with materials they need to inform people about the importance of the farm bill for farm production, conservation and nutrition.

The group will debate its policy positions on Tuesday, but Johnson said it is already clear that Farmers Union wants “major fixes” to the Agriculture Risk Coverage, Price Loss Coverage and dairy programs and more assistance for beginning farmers.

“I don’t know how the farm bill can be done without more money,” Johnson said. But he also acknowledged that among farm leaders, “I am largely alone in advocating we have to put more money in the farm bill.”

Johnson also said that one of the reasons it is difficult to add more money is that the deficit will go up under the tax law that Congress passed in December.

“We were the only farm group that opposed the tax bill,” Johnson said. “How can you add that much to the deficit and ignore its impact on legislation? Many of these same folks who talked about deficit voted for the tax bill are saying we have to make major cuts because we discovered the deficit is a major problem.” 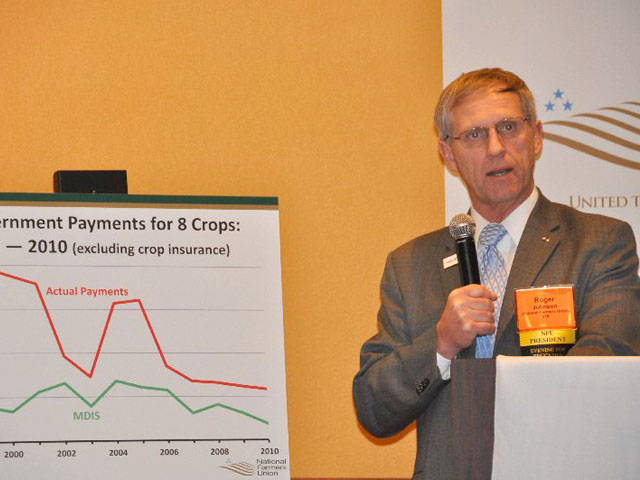