I've spent the better part of my career writing about the various ways national policies affect American farmers. So I can honestly say that I was immediately troubled when I started reading the book "This Blessed Earth, a year in the life of an American family farm," by Nebraska author Ted Genoways. "This Blessed Earth" was published by W.W. Norton & Co. in mid-September and I was able to pick it up just a few weeks later when Genoways and I both attended a Society of Environmental Journalists conference in Pittsburgh, Pennsylvania.

I was troubled after turning just a few pages of "This Blessed Earth" because I realized it is the book I wish I had written.

Genoways details both a single farm year and the history of the Hammond family and their farm operation, Centennial Hill Farm, in east-central Nebraska. All the while, Genoways weaves a parallel tale of American agricultural policy, innovations and the booms and busts throughout the lifespan of this farm's existence.

Genoways met the Hammonds while he and his wife were reporting on the fight over the Keystone XL pipeline. The Hammonds were opposed to the Canadian tar sands pipeline and decided to send a message by producing renewable energy on ground where the pipeline would cross. With some support from the group Bold Nebraska, the Hammonds built a solar barn and wind turbine in the path of the pipeline. The barn was adjoined property the family's patriarch originally acquired in the 1870s. Genoways and his wife, Mary Anne Andrei, began to know the Hammonds during construction of the barn. Mary Anne came up with the idea of following the family and photographing them over time. Ted later began thinking there was a story in words as well, so the couple collaborated on the book.

"Mary Anne was the one who really started talking about how we, like a lot of other people, had covered different families along the pipeline route and the potential threat it posed to their land and water and those concerns. But we hadn't really had the opportunity to tell the stories of one of these families in-depth," Genoways said in an interview.

Through this one family and one piece of ground, Genoways is able to highlight a broad array of national policies and global issues that farmers across the country constantly have to confront.

Regarding the pipeline itself, which now has been an international story for more than a decade, Rick Hammond's decision to protest the Keystone XL ended up costing the family a lease on hundreds of acres. A neighbor who supported the pipeline pulled the lease because of the family's outspoken opposition. The lost land cost the Hammond family substantial income.

"For Rick, those decisions were always hard because he felt like he had to do this. He felt like the pipeline was a threat to the family operation and he couldn’t do nothing, but then protesting presented its own threat to the operation. There is always such pressure that the families are under."

The Hammonds are a close family, though, and as Genoways explains, they have managed through generations of success, failure and success again -- to the point that their farm ground was lost by one generation only to be reclaimed by the next.

Rick Hammond bears the burden of ensuring the farm will pass down to his daughter Meghan and her husband Kyle. At times, Rick laments his aggressive nature to keep buying more land and taking on the mortgages for that ground when he was a younger, cockier farmer. Every time Rick sees a light at the end of the financial tunnel, another opportunity comes up that carries some risk and doesn't quite work out, often because of situations that are out of Rick's control.

As Genoways noted, "And I think that's a real common story. I don't think that's unusual at all. Farmers are at the mercy of weather and insects as they always have been, but increasingly farmers also have to deal with a complex landscape created by global competitive forces."

Genoways, whose family has Nebraska roots not far from the Centennial Hill Farm, also realized while writing the book that most people have major misconceptions about the way farmers interact with the broader world.

"The thing that really struck me right from the beginning is I just think so many people in cities think farmers kind of lead these idyllic lives out in the country and far away from modern concerns and I think farmers are more plugged into global issues than almost anybody I know," Genoways said. "They are directly affected by trade deals and policy that is shifting almost day-by-day, and certainly the global commodity markets. They are the farthest thing from isolated and away from the concerns of the world. All of the worries of the world seem to pass right through farm country every single time."

Readers have been surprised by the decisions that a farm family faces season to season, generation to generation.

"There has been some surprise from some readers about how sophisticated and complex farming is, and consequently a recognition that farmers are not just out in the field making sort of simple decisions. They are really knowledgeable and resource we should be drawing upon."

In 2014, Rick also noted his fears over what the situation would be like if corn remained below $4 a bushel for two or three more years. The family is still doing well, but they also continue to face the same run of hard years that have hit commodity farmers everywhere.

"Everybody keeps hoping something is going to happen to make things better and it just doesn't happen," Genoways said.

He added, "The Hammonds are intensely private folks and they were just incredibly brave to let us follow them around for so long, but they were very much involved in the process as I made sure the book did not further harm them. As the book has come out, they have been kind of shy about the publicity. It's the middle of harvest season and they are out worrying about the soybeans and the corn, and they are going to let me worry about the book."

"This Blessed Earth" can be found on Amazon, https://www.amazon.com/… 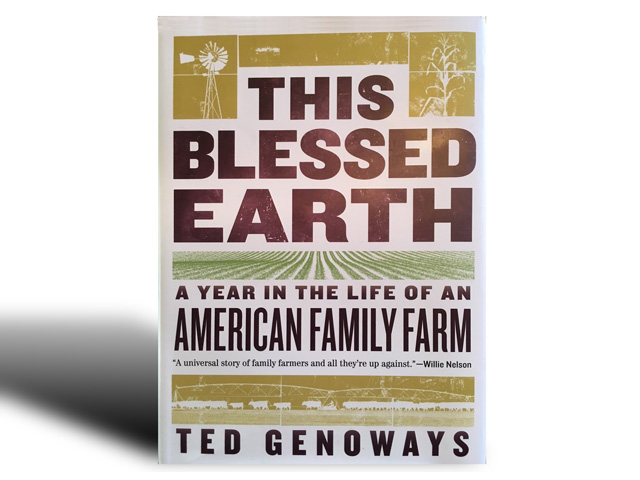