Corn (Old-crop Futures): The July 2018 contract (analyzed for DTN Strategy purposes) closed 4 3/4 cents lower at $3.62 3/4. The contract posted a new low of $3.62 last week despite weekly stochastics already sitting below the oversold level of 20%. Meanwhile, national average basis (NCI minus the July futures contract) was calculated at 49 1/4 cents Friday, 1 cent stronger than the previous week, while the carry in the May-to-July futures spread weakened a 1/4 cent (for the week) to 8 cents.

Corn (New-crop Futures): The December 2018 contract closed 4 cents lower at $3.80 1/2. Last week's low of $3.79 3/4 was a test of the previous low of $3.79 1/4. How the contract acts now will determine the secondary (intermediate-term) trend. A rally off last week's close would indicate a double-bottom, leaving the previously established uptrend in place. However a move to a new low reestablished a downtrend, putting the next downside target at $3.71 1/2.

Soybeans (Cash): The DTN National Soybean Index (NSI, national average cash price) closed at $8.89 3/4, down 9 1/4 cents for the week. The weekly chart for the NSI could still be interpreted as showing a 3-wave secondary (intermediate-term) downtrend. Key this week will be how the NSI follows the rally seen late last week. Renewed buying this week would suggest that last week's low of $8.79 was the Wave C (third wave) low. On the other hand, the NSI is giving no other indication that its downtrend has ended suggesting renewed selling could lead to a test of support near $8.69.

Soybeans (Old-crop Futures): The May contract (analyzed for DTN Strategy purposes) closed at $9.72, down 9 1/2 cents for the week. The May contract extended its secondary (intermediate-term) downtrend. As discussed last week, this was a breakout of a recent bearish pennant projecting a downside target of $9.52 1/4. It will be interesting to see if the market views last week's low of $9.55 3/4 as a test of this target price and continues to rally, or falls to a new low in coming weeks. Weekly stochastics remain above the oversold level of 20%, indicating more downside momentum is possible. 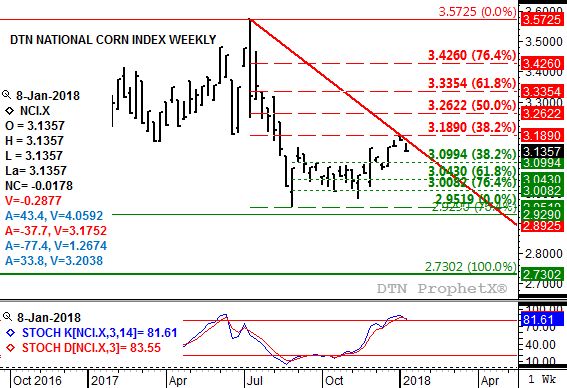