Lean Hogs: The December contract closed at $59.59, down $1.45 on the monthly chart. Indications are that the major (long-term) trend remains down. September saw the more-active contract test support near $57.75 before rallying late in the month. While it's possible the December contract could see a secondary (intermediate-term) uptrend develop, the market's monthly chart would suggest more selling is likely over the long-term.

Corn (Cash): The DTN National Corn Index (NCI.X, national average cash price) closed at $3.10, up 2 cents for the month. The major (long-term) trend remains sideways-to-down. The last three long-term highs have been lower, as have the last two major lows. This would suggest that the August 2016 low of $2.73 is a long-term target. It's interesting to note that the September range for the NCI.X was only 11 1/4 cents between $3.15 and $3.03 3/4. 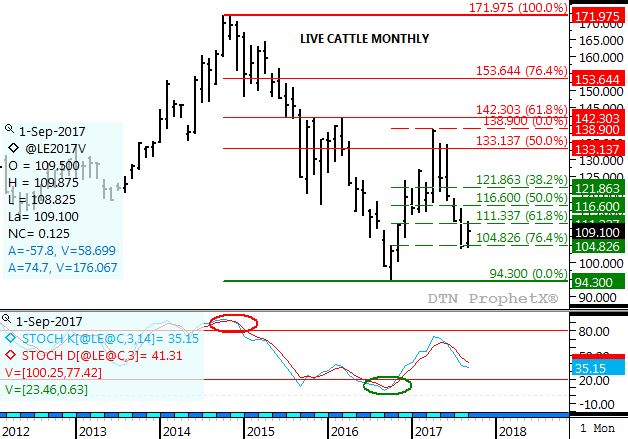