I found it rolling through my mind as I watched university scientists display their latest research on dicamba at the Weed Science Society of America's annual meeting in February.

These scientists are doing public studies examining exactly how dicamba behaves from the second it leaves a sprayer tip to the moment fine particles and vaporized gases drift out of field and are sucked into an air sampler stationed nearby. We're learning, down to the nanogram, just how much of a chemical leaves a field in the hours and days following an agricultural pesticide application.

And we can't unsee that.

For better or worse, the widespread use of dicamba is pushing an entire industry to scrutinize how herbicides behave, how they're regulated, who suffers when they don't stay put and how they affect trees, plants and even people.

For now, scientists are behind a lot of this scrutiny. The conclusions that are emerging on off-target dicamba movement are generally data-based and sound. But soon -- perhaps this year, perhaps the next -- the American public may take the wheel. Production agriculture's chemical use could never be the same again.

Chemical drift is not a new problem in agriculture, but dicamba is especially visible. Minute amounts of dicamba can cause distinctive cupping, strapping and crinkling on a wide range of vegetation, from soybeans to tomatoes and oak trees.

It's easy to understand why some farmers are pushing for unrestricted access to dicamba herbicides. Herbicide-resistant weeds are a costly obstacle for many row crop operations, and as the Roundup Ready era demonstrated, herbicide-tolerant crops are a popular weed-control system.

But for many years, organic, non-GMO and specialty crop growers have paid the price for conventional agriculture's heavy dependence on chemicals. Victims of spray drift bear nearly all the responsibility to investigate the damage, prove who and what chemical was at fault and hunt down compensation, usually in the courts. Organic growers can actually lose the organic certification they rely on for a livelihood when a herbicide drifts into their fields. In contrast, pesticide applicators usually encounter milder repercussions. Even when found at fault by a state investigation, applicators often face citations or fines as low as $100 in some cases.

But that could be changing.

After a harrowing year dealing with widespread illegal dicamba applications, the state legislature of Arkansas passed a bill increasing the fee for illegal pesticide use up to $25,000 per violation in 2017. Other states are mulling similar changes.

In a rather remarkable state of affairs, state departments of agriculture have also turned to 24(c) special local needs labels to restrict dicamba use beyond the EPA's federal labels. This use of 24(c) is rare and, some argue, not entirely legal, since this particular section of pesticide law was crafted for states to add additional uses of a chemical, not further police it. The situation speaks to a dangerously diminished federal regulatory agency. If fellow state regulators don't trust the EPA to fully protect the environment, why should the public?

EPA is now considering ending states' use of 24(c) to restrict pesticides, raising another concern: If states could no longer legally restrict dicamba as needed for their individual environmental concerns, how many would make the difficult decision to ban the chemical altogether?

Remember that those 24(c) state restrictions are in addition to some of the most complex pesticide labels the industry has ever seen. The new dicamba labels are filled with vague language and dozens of use restrictions that render legal use of the product nearly impossible. Indiana weed scientists estimated that applicators had only a handful of days in the entire month of June to apply these formulations legally last year -- and that was before the latest round of label restrictions.

Why write labels that set applicators up to fail? Part of the problem is that spraying dicamba is inherently risky, and lawyers don't like risk. The new dicamba labels essentially shift all legal liability from the manufacturers of these chemicals -- and the agency who registered them -- to the applicator. Now that this precedent is set, farmers and applicators should brace themselves for many chemical jugs of the future to bear this type of complex pesticide label.

THE WAR AGAINST AG CHEMICALS JUST GOT EASIER

Ultimately, dicamba's visibility may soon move this issue out of agriculture and regulators' domain, and into the public's. In August of 2018, I toured the small town of Waverly, Nebraska, with members of the Nebraska Forest Service. In a beautiful little recreation center called Wayne Park, tucked in among residential streets, nearly every tree we walked past bore the same distinctive signs -- cupped, crinkled leaves and shrunken canopies. At nearby tree nurseries, we walked row after row of dicamba-damaged redbuds, Kentucky coffee trees and a wide range of oak trees.

Nebraska Forest Service landscape specialist Justin Evertson has been noticing herbicide injury to the state's trees for years, especially in the spring. But only now that dicamba has increased the visibility of this problem does he have funding available to study its long-term effects. For the next two years, led by South Dakota State University, Nebraska will join five other Midwestern states to conduct surveys of herbicide injury to trees in rural America.

Their findings will be public. And we won't be able to unsee them.

Agrichemical companies, regulators and farmers have perhaps one more year, maybe two, to take ownership and responsibility for off-target dicamba movement. After that, they may have to accept the consequences of an unsympathetic public calling the shots on this chemical's use.

Consider the recent public outcry over minute glyphosate residues found in our cereal and booze. The American consumer has shown little appetite for ag chemical exposure, even miniscule amounts of relatively safe compounds. Air sampler data showing dicamba particles or vapors lingering in the air well outside agricultural fields for hours or even days will not be well received in the kitchens and playgrounds of this country.

The EPA conducted its usual human health risk assessments on the new dicamba formulations before registering them in 2016. (It declined to redo them when it reregistered the products in 2018.) But the agency's 2016 analysis relied on the assumption that the new formulations had very little volatility, so vaporized dicamba would not be a significant source of exposure for most people. University research on dicamba volatility is now calling that assumption into question. With 60 million acres of dicamba-tolerant crops predicted for 2019, University of Arkansas weed scientist Jason Norsworthy is warning of "atmospheric loading" of dicamba in the summer months in areas of heavy dicamba use.

Questions about human health and safety are already arising. At DTN, we have fielded multiple calls from rural citizens and farmers, who are wondering and worrying how repeated exposure to vaporized dicamba affects them and their families.

No one has answers for them just yet. But they may soon -- and it won't necessarily be weed scientists and qualified toxicologists doling them out.

Agriculture is an industry that has thrived and improved for decades by following new scientific information, from genetically modified crops to self-steering tractors. But sometimes science reveals things the industry doesn't want to know -- such as how a chemical moves after it's applied and where it goes.

Let's not unsee any of this. Let's open our eyes wide, ask the difficult questions and follow the science where it leads us. 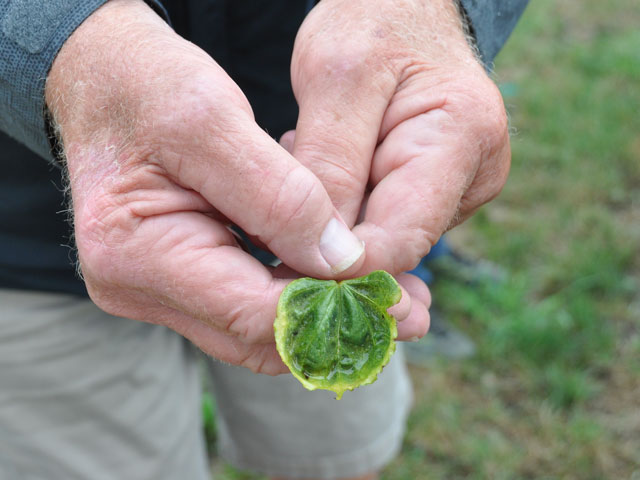 DRunge1497070264
5/10/2019 | 1:44 AM CDT
The use of chemical and pesticides in the agriculture field should be limited. These pesticides cause severe problems such as cancer, brain damage, organ failure, skin irritation, birth defects. It is better to avoid these pesticides and go for an alternative such as the use of eco-friendly products. The earth friendly products do not harm the nature and increase plants productivity. By visiting https://www.rosevillecapestcontrol.com get to know more about eco-friendly ways of pest control.